Eddie Martin, All this Mayhem

How did two pro skateboarding brothers descend into drugs, detention and death? Screen spoke to Eddie Martin, director of documentary All This Mayhem, to find out. 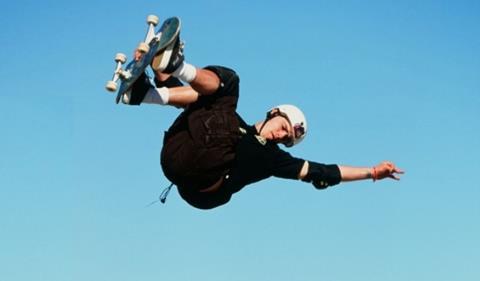 Chances are you’ve never heard of the Pappas brothers. But to those familiar with the world of pro skateboarding, Tas and Ben Pappas were the bad boys from Australia that took on living legends like Tony Hawk - and won.

Sadly, their rags to riches story was short-lived and what followed was a tragic tale of drug smuggling, prison and murder.

The full story is told in All This Mayhem, a documentary from director Eddie Martin, who used to skate with them in Melbourne back in the day.

“I have always been interested in stories about outsiders,” says Martin, who previously made Jisoe, a 2005 doc about troubled Australian graffiti artist Jason Hughes; and Lionel, a 2008 doc about a young aboriginal boxer who rose to become a champion in the 1960s.

“I knew the unbelievable story of the Pappas brothers as I had known them as kids and always followed their exploits. So it didn’t come about overnight. We first approached Tas when he was in prison.”

Hundreds of hours of archive

The film combines archive and interviews to chart the Pappas meteoric rise and fall, with Tas speaking from a prison cell as he recalls the highs of the ‘vert ramp’ and the catastrophic wipe outs.

Around 350 hours of footage was sourced of the brothers, offering a window into personal moments.

“With the bulk of the footage coming from within the sub culture, it was based heavily on personal relationships,” says Martin.

“Initially we reached out to all the people from the skate scene that we knew were filming during that time and it spawned from there. These guys were primarily filming skate tricks, but I knew there would be key moments in-between takes.”

However, the footage presented its own set of challenges. “Rather than using commercial/news based archival this was utilising DIY home made material,” explains the director.

“It is very personal because the people filming were friends of the brothers and therefore the footage captured of them is extremely natural and real, but it’s generally very rough technically.

“This really was the first generation to have handy cams at their disposal and they were unknowingly documenting their lives.”

“My producing partner George Pank had worked with producer James Gay-Rees on some previous projects,” explains Martin of how Playmaker became involved.

“I knew our story had many archival elements similar to Exit Through the Gift Shop and asked if he would pitch to them. George did an amazing job and we were incredibly fortunate to have their support.

“They brought incredible experience and mentorship. In the UK there seems to be an uplifting culture of support in the arts generally. I really appreciate and admire that.”

Gay-Rees, who is currently working on a documentary about tragic singer Amy Winehouse with Senna director Asif Kapadia, has said of the film: “With Senna, we saw Icarus fly too close to the sun in a way that inspired and mesmerised. In All This Mayhem we tell a story that defies belief. Tas Pappas lived this story and, as he said, if this film helps one kid avoid the mistakes he made then all the hard work will have been worth it.”

The film, which premiered at the Adelaide Film Festival last October and screened at the Sydney Film Festival and Sheffield Doc/Fest in June, will be released theatrically in the UK on August 8 through Koch Media.

It will receive a global digital release, led by iTunes, on Sept 9 backed by the global marketing muscle of Vice Films, which provided the project with gap financing and has worked closely with distributors Koch, FilmBuff and eOne.

“We were at a critical juncture in financing and our executive producer Ken Marshall (Filth, London to Brighton) had a relationship at Vice,” recalls Martin. “He made the introduction and it was a great fit.

“Vice are brilliant. They left us alone and let us do our thing. They loved the finished product and have subsequently been an invaluable part of our marketing campaign.”

“Vice has been covering skate since we started publishing, diving into the culture of skateboarding and the characters that give it life,” Moretti tells Screen.

“Our online series Epicly Later’d by Patrick O’Dell is a perfect example of our approach to the sport. All This Mayhem fits perfectly into this tradition. But it was the family drama between these two brothers that really grabbed me.”

The skate world has been “overwhelmingly positive,” in its reaction to the film, according to Martin. “There hasn’t been a film showing this perspective of the skateboarding scene before, so there seems to be a few surprises in there for them.

“What surprises me the most is the feedback I receive when they’re saying it has opened their eyes to a few things.”

Unlikely to provide a quote for the poster is skateboarding superstar Tony Hawk, who does not come off well in the film. “We did approach him for an interview but he declined,” says Martin.

“Normally skate documentaries are filled with fawning talking heads. I can only assume he didn’t want to sit around saying nice things about the brothers.”

When asked about the Pappas brothers, a skateboarder in the Screen office says: “Those boys were crazy… but their skating was unreal. What a waste.”

But the future seems bright for Tas, who is out of prison and has found God. His release provided Martin’s most emotional shot of the film.

“I knew what he had been through to arrive at that moment,” says the director. “We only had permission to shoot from a distance and we only had the one take. It was an extremely high pressure shot and for me personally carries the most weight in the film.”

As for how much control the once volatile Tas had over the film, Martin adds: “You need to be incredibly brave to bare your soul to the world so he did have consultation rights.

“At the end of the day it was a process for us by working through some of the more confronting stuff. But ultimately he allowed us to go where we wanted to go.

“This is a cautionary tale and Tas understood we had to be honest to connect on that human level. Audiences have really good bullshit detectors.”

All This Mayhem is released in cinemas across the UK by Koch Media on August 8. The film will receive a global digital release on September 9.