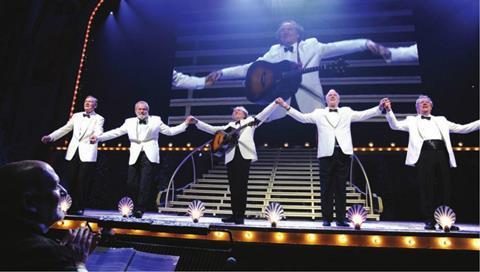 So while the UK and the global industry comes to terms with a tough 2014 at the box office, event cinema - despite its relatively small contribution to the big picture - continues to represent a highly robust and successful growth area.

Event cinema grossed some $29.1m (£18m) at the UK box office in 2013, more than double its 2012 total. By early September this year, the sector accounted for gross receipts of more than $37.2m (£23m). It is increasingly a go-to for those unable to attend the live event due to sell-outs, cost or location.

That growth looks set to continue as the UK is at the forefront of the sector’s global boom, fuelled by voracious and loyal audiences, plus commercial and indie exhibitors and a growing band of traditional and specialist distributors keen to take advantage of the bankable, high-return business.

The number of industry players in event cinema is increasing. The UK’s Event Cinema Association, launched in late 2012, now has more than 50 members. In step with the growth, the Screen Awards (October 23) has also added a new category for best event cinema campaign.

Opera remains king in terms of number of event cinema shows, with 44 last year, but theatre is increasingly popular and accounted for the largest slice of the box office in 2013: $11.7m (£7.2m) from only 14 events; some 40% of box office.

3D is not a major audience incentive, and while live shows remain the gold standard, recorded events are increasingly popular.

Secret Cinema also remains an ever-popular brand in the UK, with this year’s Back To The Future event drawing ticket sales of more than $5.7m (£3.5m) for its site-specific installation.

Exhibitor-distributor Picturehouse continues to be a market leader in the space, distributing six of the top 10 highest-grossing alternative content events in the UK this year and screening more than 100 events in its cinemas.

“The market has been initially dominated by high-art content - opera and ballet, then theatre and, more recently, the museum exhibition shows,” he explains. “The opera audience in the UK is sustaining rather than growing dramatically, but theatre seems to buck that trend, partly because of the freshness of the content and the big hits that come on a regular basis.”

The National Theatre (NT) has been quick to develop its offering, now reaching 500 screens in the UK and 1,500 worldwide. The theatre sells content directly to larger chains and has an important partnership with Picturehouse.

“NT Live started out losing a small amount,” explains David Sabel, head of digital at the National. “However, it has developed into a profitable series. We haven’t made a loss on a broadcast in two years. Sometimes the gain is small, sometimes the shows take millions.”

“In the early days we were having to bank on productions that had a star actor or which were famous plays,” says Sabel. “Six years down the line, we’ve built a loyal audience that are prepared to take more risks. We still do the big-name shows, but we can be more adventurous in our programming.”

Re-releases are becoming more and more important. Frankenstein - starring Benedict Cumberbatch - will get its third annual re-release this month. “It has improved its performance each year partly because the distribution has grown but also because the awareness around the brand and the show has grown,” says Sabel.

The company’s theatrical success has led to its first theatrical acquisition in the shape of Rufus Norris musical London Road (a former NT production) and a growing number of UK partnerships.

“We’re increasingly working with Picturehouse and non-traditional venues such as film societies and village halls that have invested in satellite equipment,” adds Sabel.

“We’ve grown our output each year and our aim is to make at least 10-12 productions in the next 12 months.”

“With Helen Parker’s UPI acquisitions team we are exploring future opportunities that will help grow our market share in this growing business.”

TV will become a more regular presence in cinemas, with BBC Worldwide’s 50th anniversary episode of Doctor Who: The Day Of The Doctor ($10m worldwide), having paved the way.

“We’re increasingly developing and commissioning our own content in that space. We know what works for us and are able to bring together the right directors and bands.”

The company filmed and will distribute a concert film from boy band One Direction, One Direction: Where We Are, later this month, including bonus interviews - a growing feature of event content.

Beyond the inbuilt audience

Despite the opportunities, there remain challenges. “There is not a huge marketing budget behind alternative content, so at the moment it tends to be content with inbuilt audiences that becomes successful,” says Allenby.

“That’s a barrier to entry for some content owners and distributors. People are also riding on the back of well-publicised successes that make it appear quite easy and that there’s a huge industry here to move into. I don’t think it’s as simple as that.”

Some independent distributors are also left frustrated by the added clutter. “It’s a reality that alternative content takes away from screens that films would otherwise be shown on,” one indie distribution expert tells Screen.

“Operas have previously taken out my two evening shows on a Saturday night. But what can you do? They might make more that night than your film does the whole week. You can’t blame exhibitors for playing what customers want to see.

“Alternative content is adding to the digital TV-like nature of cinemas at the moment,” the executive points out. “With near 15 films released each week, fewer people are watching each film. There’s so much choice. But ticket prices are rising and that’s masking the plateauing audiences.”

One specialist distributor also recognises that exhibitors are getting tougher on exhibitor-distributor splits.

Predictably, commercial exhibitors, as well as independents, see only growth in the sector: “We believe this will be a steeply growing part of our business,” says Tim Richards, CEO of Vue Cinemas. “It’s still only several points of our box office, but the growth we see is very exciting.

It’s only in the past 18 months that circuits have been fully digital and you don’t see the full potential of alternative content until you are fully digital.” Richards counters the argument that films lose out.

“This doesn’t take time away from movies. Some 70%-80% of the time, cinemas are dark. This creates a tremendous opportunity for us and distributors [to screen live or recorded events].”

Another potential growth area is in live sports screenings. To date, Vue has shown Formula 1, rugby, tennis and the football World Cup.

“The holy grail of alternative content is something that is regular,” adds Richards.

“That hasn’t happened with sports yet, but it will. Soon you’ll be able to watch the top teams in the Champions League in cinemas.”

As players consolidate gains in the UK, those companies are now increasingly looking to international markets to fuel growth.

NT Live has just filmed its first non-UK production - the Broadway production Of Mice And Men starring James Franco and Chris O’Dowd. Distributed by BY Experience and Fathom Events, the NT Live cinemacast will hit 700 screens in the US and Canada alone.

“This season we sold about 750,000 tickets for opera around the world, equalling the number sold for the opera itself. Next season, cinema tickets will be close to one million.”

Monty Python Live (Mostly) was another success story, having recorded audiences of 330,000 in 52 countries. “In most instances we were dealing with exhibitors directly, not using sub-distributors,” says Allenby. “We are building up a global network.”

“It depends on the content, but eastern Europe and Latin America are significant growth areas,” says Grant Calton, CEO of distributor Omniverse Vision.

“Ten years ago, Romania had hundreds of screens, now the market has 8,000 screens. That’s extraordinary growth. China is growing but alternative content is subject to quota regulations. We’ve just signed a VoD deal in China and are likely to get more involved in that market in the next 18 months.”