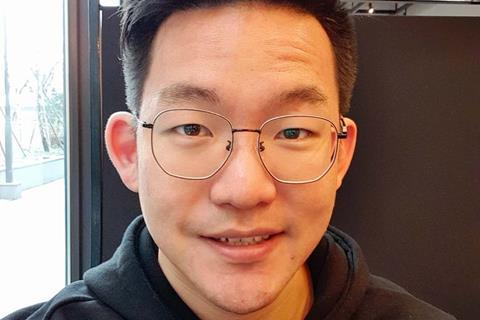 Before graduating from university, Lee started working at documentary production house Big Fish Media, where he travelled overseas on shoots, translating and playing the role of line producer for documentaries that screened on South Korea’s national Educational Broadcasting System (EBS) channel. Finding he was more interested in development and distribution, he joined Contents Panda’s international business team in 2019.

Since then, Lee has worked on films such as Peninsula, Yeon Sang-ho’s follow-up to Train To Busan, which sold to 160 territories and opened last year in the middle of the pandemic to clock up $63.6m worldwide. He credits Danny Lee, head of international business at Contents Panda and a Future Leader himself in 2017, for teaching him about the international industry.

“Films can’t just stay inside Korea,” he says. “Our goal is to keep trying to get them out overseas and expanding. I’m ready 24/7. For now, that energy is bigger than all the work.”

Contents Panda has been going into the office, but the sales execs work from home during online markets to accommodate meeting schedules that can run from 9am-10pm local time. “Our strategy is to have as many meetings as possible, as you never know how a situation can change,” says Lee. “We stay in contact as much as possible so it’s almost like we’re meeting in person and then the lag between time differences decreases a little.”