SCREEN SUBSCRIBERS: Flying high after a trio of main-prize victories at Berlin, Cannes and Venice, Celluloid Dreams veteran Hengameh Panahi talks about her 30-year career and working with the world’s top auteurs. 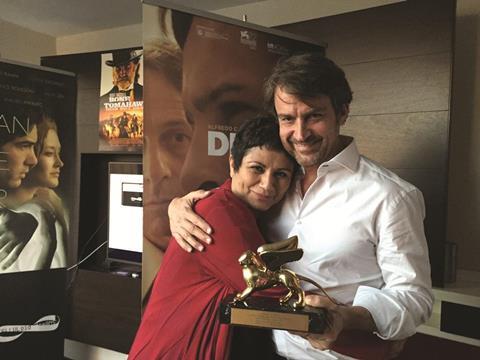 On her first trip to the US in 1984, Hengameh Panahi spent an afternoon at The Walt Disney Studios scoping out two young animators whose short films had piqued her interest back home in Brussels.

Their names? John Lasseter and Tim Burton. At the time Panahi was head of international at Brussels-based animation studio Graphoui.

“I was 28 and it was my first job,” says Panahi, who had gone to Los Angeles with Graphoui associate, French-Belgian comic-book publisher Casterman, to discuss a potential collaboration with RKO.

In between appointments, she slipped away to invite the budding film-makers to the fledgling Brussels Animation Film Festival, since renamed Anima, that was being spearheaded by Graphoui’s Philippe Moins.

“They were like, ‘Great, we’d love to come but we can’t afford the fare,’ to which I replied, ‘Neither can we,’” says Panahi, who managed to convince American Airlines to sponsor two tickets. “They were my first pick-up,” she jokes.

Lasseter presented his 30-second test film based on Maurice Sendak’s Where The Wild Things Are, an early experiment in computer animation, while Burton showed his short film Vincent.

During their stay, Panahi took them to the Carnival of Binche, a pre-Easter event dating back to the 14th century featuring flamboyantly dressed clown-like performers known as Gilles.

“I’ll never forget driving them there in my old Deux Chevaux,” says Panahi. “They were unstoppable, sketching in their notebooks the Gilles in their costumes with ostrich feathers, throwing oranges at people.”

This pursuit of Lasseter and Burton was a sign of things to come. Some 30 years later, Panahi is the founding chief of influential auteur-driven sales company Celluloid Dreams, which is celebrating an unprecedented major festival hat-trick after a trio of titles on its slate - Taxi, Dheepan and From Afar - took the top prizes at the leading festivals of Berlin, Cannes and Venice this year.

“I’ve acquired more than 800 movies, one by one, trained more than 150 young people in the business and invested more than $55m in minimum guarantees,” says Panahi.

The directors she has worked with over the past three decades are a who’s who of world cinema and include Jacques Audiard, Takeshi Kitano, Jafar Panahi (no relation), Francois Ozon, Bruno Dumont, Todd Haynes, Thomas Vinterberg, Laurent Cantet, Hany Abu-Assad, Samuel Maoz, Alexander Sokurov, Tomm Moore and the Dardenne brothers.

Panahi launched Celluloid Dreams in Brussels in 1985. From the very beginning, auteurs have been at the heart of its activities.

“Most sales companies were focused on domestic movies and often their own productions,” says Panahi. “My dream was to build a directors’ label, seeking out, promoting and branding talents from around the world.

“It was about a long-term vision, like that of a publisher, and creating value around a film-maker rather than bailing out after one unsuccessful film.”

Tehran-born Panahi kicked off her slate with Iranian director Abbas Kiarostami’s Where Is The Friend’s Home?.

“I was so amazed by his distinctive talent but also it was my first connection with my native country and culture since I’d left as a 12 year old,” she says.

Other works from Iranian cinema’s post-Islamic Revolution Second Wave would follow in its wake, including the films of Kiarostami’s then-assistant Jafar Panahi, Majid Majidi and Mohsen Makhmalbaf.

Panahi moved Celluloid Dreams from Brussels to Paris in 1989. “Alexandre Heylen, a very dear friend, had just left MK2 to found Mainstream. He had an amazing slate of directors. I helped him manage his company, shared an office and learnt a lot about the business,” she says.

In the beginning, her firm was an anomaly among the other Paris-based companies because it did not have any French productions on its slate.

When Panahi did move into French cinema it was with aplomb, picking up a quartet of debut features in 1997: Bruno Dumont’s The Life Of Jesus, Francois Ozon’s See The Sea, Gaspar Noé’s I Stand Alone and Philippe Grandrieux’s Sombre.

“When I saw the short films Francois Ozon had made while at Fémis, I thought, ‘This is the new Chabrol.’”

Panahi represented nine of Ozon’s films - including Swimming Pool and 8 Women - up until Angel, after which the director parted company with long-time producers Olivier Delbosc and Marc Missonnier at Fidélité Films.

Three film-makers who have remained faithful to Panahi throughout their careers are Takeshi Kitano, Jafar Panahi and Jacques Audiard. She has sold 13 of the 17 Kitano films produced by Office Kitano.

“Masayuki Mori, his long-term producer, did a sort of casting for sales agents and that’s when we started working together. Even when StudioCanal or Miramax came knocking, he would say, ‘You have to contact Hengameh.’ That’s very Japanese and mind-blowing. When you’re a partner with a Japanese company, it means something and it’s forever. It’s never about the money.”

Panahi first started working with Audiard on The Beat That My Heart Skipped, starring Romain Duris as a mobster’s son with musical aspirations.

“When I picked him up, I thought he was the best director in France. I was so excited that I called everyone to say, ‘Guess who I’m representing?’ And they said, ‘Jacques who?’” says Panahi, who would spend two years promoting and selling the film, which went on to win a Bafta in 2006.

Celluloid’s recent festival hat-trick comes as the company rises from the ashes of a difficult few years following the global economic crisis of 2008-09.

The company was stopped in its tracks in 2008 after the financial crash wiped out a number of its buyers, resulting in a 70% drop in receivables in a matter of months.

“I lost a big chunk of money,” says Panahi. “It’s very hard to go into the red to the tune of millions in a matter of months without having done anything wrong.”

It was a particularly bitter pill to swallow because, in 2007, Panahi nearly merged Celluloid with the UK’s HanWay to create Dream Machine, but the deal stalled at the last hurdle.

She was then courted by billionaire businessman Len Blavatnik, who was bank-rolling Stewart Till’s plan to create an integrated European studio in the vein of PolyGram.

“2008 was the beginning of my nightmare and worse still I’d just said no to this huge deal to cash out,” she says.

Just six months earlier, the company had been at its height, employing 45 people and selling 35 films a year. In the wake of the downturn, Panahi had to let many of the staff go, although she ignored the advice of those who told her to close down Celluloid Dreams and start over.

“I had to save the company, not just for me and the bank but also the producers and distributors who trusted me,” she says.

“I said, ‘If I file for bankruptcy there’s going to be a massacre.’ It’s an old company and there are lots of rights still in exploitation around the globe.”

In the meantime, she found the energy to partner with Efe Cakarel to launch The Auteurs, one of the world’s first independent cinema VoD platforms - since renamed MUBI - and also create genre label Celluloid Nightmares with Los Angeles-based XYZ Films.

These partners are now flying solo but Celluloid Nightmares is going strong with the recent festival launch of S Craig Zahler’s western-horror hybrid Bone Tomahawk, which has been declared a cult classic after screenings in Toronto, London and Sitges.

“I didn’t let go, didn’t stop. As the saying goes, what doesn’t kill you only makes you stronger. The company is saved and there is no more debt.”

Panahi suggests Celluloid’s hat-trick feat this year is in part due to her decision in 2014 to go back to basics and focus on fewer films.

“I stopped the machine, let people go and started all over again,” she says. “It’s a sort of ‘slow food’ way of selling films. I wanted to be hands-on for every single decision on each movie, bringing to bear my 30 years of experience to see if that would make the difference to help a movie grow.

“At a time when volume and speed are leading us all to confusion, I wanted to offer a highly personalised service and find the true meaning of being busy with films again,” she adds.

“I went to Berlin with one movie, Taxi. I was in Cannes with Dheepan and Much Loved, and Venice with Heart Of A Dog and From Afar - and bing, bing, bing. I’m not saying it’s a magic recipe as the only thing we all know is that no-one knows.”

With this hard-fought success, Panahi’s dreams of bringing the world’s top independent directors to the big screen and beyond remains very much intact.

“When big corporations are managers and bet on yesterday’s success, we independents have to be visionary,” she says.

“We’re good when we’re personalised, make strong choices and trust our instinct. My dream remains to be in business with great producers and directors to bring crossover films with market potential to my distributors.”