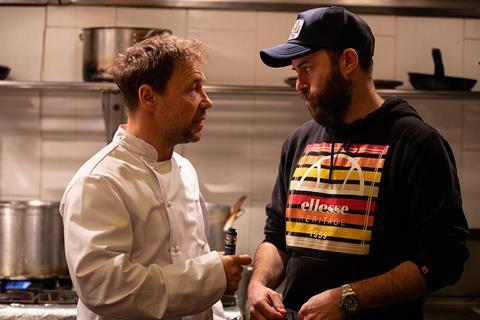 Philip Barantini and Stephen Graham on the ‘Boiling Point’ set

In January 2020, actor Stephen Graham and the filmmaking team behind Boiling Point made a snap decision that would prove wholly consequential for the life of the quadruple Bafta-nominated UK indie drama.

The tight shooting schedule had originally been set for April that year to accommodate Graham’s availability, but now the actor’s window had suddenly jumped forward to March — and he would then segue on to the set of recurring TV series Peaky Blinders.

Now the question was: would Graham like to take a week off, after Venom: Let There Be Carnage, or move straight into Boiling Point? “And he said, ‘No, let’s just get it done,’” says Boiling Point producer Bart Ruspoli.

The cast and crew assembled in March 2020 at the east London restaurant location for two weeks of rehearsal and technical run-throughs — vital preparation for a film that would be shot in one continuous take — with Graham joining for the second week.

Director/co-writer Philip Barantini then completed four whole takes of his film, two per day for two days, before the Covid pandemic lockdown prompted the producers to wrap production. Eight takes over four days had been planned, but it didn’t matter: the third take was golden and they had their film.

“If Stephen had said, ‘I’ll take the week off,’ we would not be here today,” says Ruspoli, speaking to Screen International via Zoom with Barantini and other key members of the creative team. “It was that close. We’re a small independent film, the money would have been lost.” Adds Barantini: “And we probably wouldn’t have gotten Stephen again because he’s the busiest man alive.”

Boiling Point owes its origins to friendships that were formed in 2000 on the eight-month shoot of HBO’s Second World War miniseries Band Of Brothers, in which Barantini, Ruspoli and Graham all had roles. Barantini and Graham, both from Liverpool, quickly bonded.

“It was, and is still to this day, the most incredible professional experience,” says Ruspoli, who reels off names from the Band Of Brothers ensemble who have gone on to appear in films that he has produced. “There was an incredible bond that was forged between almost all of us on the set. I don’t think there’ll ever be anything again quite like it.”

The three men’s careers went in different directions, with Ruspoli producing his first feature in 2010, and Graham emerging as a major screen star. Barantini’s acting career did not flourish, and he embarked on a parallel career as a chef, while still landing occasional screen roles. He had always harboured ambitions to be a filmmaker but lacked self-belief and visible role models (“Where I grew up in Liverpool, it’s just unheard of”).

Then, a few years ago, his mother passed away. “That changed everything in my perspective on life,” says Barantini. “I suddenly thought, ‘I really want to give this a go. What am I going to lose?’”

Barantini’s first short film as director Seconds Out, which shot in 2018, impressed Graham, who then agreed to star as the protagonist of his second one: Boiling Point, a 22-minute, single-take film set in a restaurant kitchen, with the stressed, booze-medicating head chef ultimately suffering a major health incident. The short was nominated at the British Independent Film Awards (Bifas) in 2019, by which time Barantini already had one Ruspoli-produced feature as director under his belt, London crime thriller Villain. He also netted an agent on the back of the Boiling Point short, Jago Irwin at Independent Talent, who supported the filmmaker’s belief that the short could be developed into a feature.

Both versions of Boiling Point are co-written with James Cummings, and shot by director of photography Matthew Lewis — a creative relationship that arose from rather humble circumstances. As a jobbing actor, Barantini agreed to appear in two short films being made by students at the University of Portsmouth, one co-scripted by Cummings and both shot by Lewis, and was duly impressed by the two young men.

Back in the UK, Barantini was helping out at acting workshops in Manchester and asked Cummings to write some scenes (“I think we basically paid him with some orange peel”). Then, while filming a small role in Lithuania for TV series Chernobyl, he sent Cummings his outline for the Boiling Point short. “I was like, ‘This is the film, basically, can you just make it better?’”

He also reached out to Lewis, explaining that he wanted the film to be fast-paced, with overlapping dialogue — “It’s got to feel real, like you’re in the kitchen.” Lewis’s reply: “Why don’t you just do it in one take.”

For Barantini, this was never simply a directorial flourish or a marketing hook. “It was to create that extra layer of tension, and give the audience a feeling that they can’t look away, and have them be immersed in this world. When you work in that industry, the moment the doors open to the moment the doors close, it’s one take and you don’t get chance to stop and pause. Time is ticking and everyone’s going in one direction.” 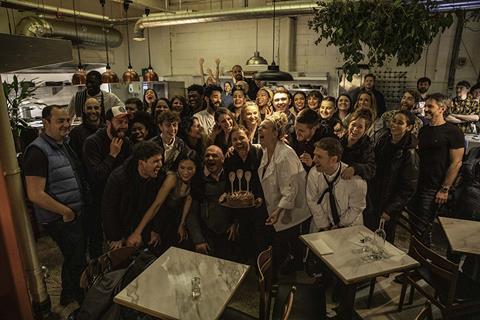 The cast and crew of ‘Boiling Point’ celebrate the final take

For the feature, Barantini and Cummings batted around conventionally shot ideas including one that was essentially a sequel to the short, in which the troubled chef would undergo recovery in rehab, and another set in a kitchen on an oil rig, but nothing was clicking. It was only when the filmmaker suggested they retain the single-shot approach and expand the drama into an eventful 90 minutes during a busy night at the restaurant that the team — including, crucially, their star Graham — became excited.

Ruspoli and fellow producer Hester Ruoff (who likewise began as an actor, and has been producing or executive producing shorts since 2013) had no luck with any of the UK’s principal independent film funders — BFI, Film4 and BBC Film. Instead, they attracted equity finance, including from Ian Kirk’s Australia-based White Hot Productions, which had funded the Boiling Point short, plus Alpine Films and Insight Media Fund. Despite only allocating four days for the shoot, this needed to be a low- rather than micro-budget feature, coming in at $820,000 (£603,000) including the UK tax credit.

Costs included booking out the restaurant for three weeks for the rehearsal and shoot, and a significantly large crew, ensemble cast and background artists. “The sound is completely different from your standard film,” explains Ruspoli. “We needed two sound recordists and six assistant sound recordists. Everyone had to be miked. We needed 38 radio mikes, we needed special permission from Ofcom, because we were using so many channels that we were interfering with police radios.”

Barantini is by no means the first filmmaker to make a single-shot feature, and he follows in the footsteps of Ken Loach and Shane Meadows with his improvisatory method in building characters with actors and creating space for natural conversational dialogue. But in combining the two, he demonstrated an unusual capacity for risk.

“You have bullet points, but it’s not a written script, per se,” explains Graham. And while the dialogue remained loose, the story beats were sharp and the choreography tight. “We spent a full day and a half, and I mean from nine o’clock in the morning till six o’clock at night, walking through with the camera, making sure we were in the right places, making sure no-one bumped into the camera or the furniture,” adds the actor. “The shoot offered possibilities of freedom within that structure, so little things can change. Hopefully no camera movements will change, but we can improvise within the structure that we had set up.”

Although eight full takes had been planned, the filmmakers say they have no regrets that pandemic restrictions cut the shoot in half. Barantini’s goal was always clear: “I don’t want it to be set. I want them to be loose, because it’s important that actors listen to each other. And if they don’t listen to each other, then there’s a disconnect and it doesn’t feel real and natural.” But by the fourth take, the performers were already losing that looseness.

“Technically it was the best,” says Ruspoli. “It was perfect in its movement because it was so well drilled into people, but it lacked that connect. The fourth take, no-one will ever see that, that’s locked away in a safe.”

The filmmaking team had their feature ready by August 2020, and were impatient to see a release, but the pandemic brought delay. Vertigo Releasing, which had distributed Villain, came in for the UK, and Charades boarded for international sales, eventually launching the film at Karlovy Vary International Film Festival in August 2021. Vertigo announced a couple of late-2021 release dates, eventually shifting back to January 2022, with a hybrid day-and-date release into cinemas and video-on-demand platforms.

“Charades kept their powder dry over the pandemic, even though we were going, ‘You’ve got to get our film out there,’” says Ruspoli. “They were like, ‘Guys, calm down, don’t worry.’ And they played their hand absolutely right.”

Vertigo had grossed a healthy $657,000 (£484,000) at UK and Ireland cinemas after seven weeks, while in France UFO Distribution achieved an impressive 60,800 admissions after four weeks, releasing it as The Chef. The film has sold “all over the world”, says Ruspoli and, once distribution revenues come in, the financiers “will be well into profit”.

In December, Boiling Point won four awards at the Bifas, including cinematography for 25-year-old DoP Lewis and supporting actress for Vinette Robinson, who makes a vivid impression as the restaurant’s sous chef. Then in February came Bafta Film Award nominations for outstanding British film, outstanding British debut (for Cummings and Ruoff — and also Barantini in his capacity as writer), leading actor and casting (Carolyn McLeod). And by the end of that month, Barantini had already started shooting his third feature, Accused, produced by his Three Little Birds Pictures partners Sara Sehdev and Samantha Warham, once again with the involvement of Cummings, Lewis and casting director McLeod.

For Barantini — who directed his first short in 2018 and first appeared on screen in 1998 TV movie Big Cat playing a 15-year-old version of David Morrissey’s character in flashback — the Bafta love for Boiling Point is way beyond any expectation.

“I can’t begin to tell you, because this is a huge passion project for me and everybody involved,” he says. “We were a family and we still are a family. So it’s incredible to be doing this, and to be nominated for the Baftas is beyond my wildest dreams. I never, ever expected it. It’s wonderful.”