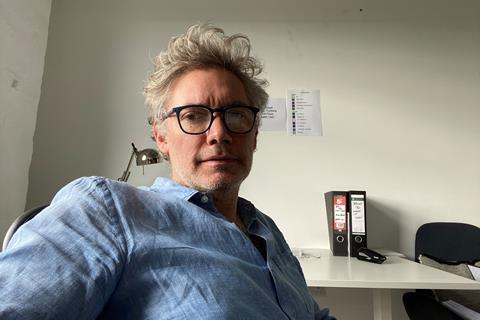 UK filmmaker Kevin Macdonald has recalled how he considered shooting The Mauritanian as a documentary as the project struggled to raise finance and nail the script. The film made its world premiere at the virtual Glasgow Film Festival last week.

Macdonald was talking during an industry-only interview at the festival that was hosted by Screen. He said the initial plan had been to dramatize the story of Mohamedou Ould Slahi, who was imprisoned in Guantanamo without charge by the US government for 14 years.

But a combination of storytelling and fundraising challenges led Macdonald to consider directing the film in a different format.

“There was a point at which we couldn’t raise the money and were finding it very hard to get the script right because it’s very complex story, covering 14 years of someone’s life,” said the Glasgow-born filmmaker.

“We played around with different entry points, trying to figure out the best approach, but we got quite dispirited about it and I did think, ‘Oh, maybe I should make it as a documentary.”

Macdonald began as a documentary filmmaker, winning the Oscar in 2000 with One Day In September, and has made a mix of factual and fiction features throughout his career from dramas The Last King Of Scotland and How I Live Now to documentaries including Touching The Void, Marley, Whitney and Life In A Day.

Preparing his latest project, he even got as far as filming interviewing lawyer Nancy Hollander, played in the film by Jodie Foster, and planned to do the same with Slahi and lawyer Stuart Couch, played in the drama by Tahar Rahim and Benedict Cumberbatch respectively.

But, ultimately, Macdonald wanted to reach as wide and mainstream an audience as possible with The Mauritanian, in a way he believes only a drama can.

“What we hope is that we’ve made a film that is accessible to a mainstream audience,” said the director.

“When Mohamedou and I first talked about what kind of film this should be, we both agreed it has to be a film that doesn’t just sing to the choir… We want to reach a mass audience, and change people’s minds. That’s why it’s so important to have big stars in it and to make it feel like it’s a thrilling story and entertaining.

“I want audiences to sit down, be entertained and take away a feeling of compassion and empathy for Mohamedou and what he’s been through as well as a moral fury about what was done and the sense that this shouldn’t happen again.”

The film received its world premiere at Glasgow Film Festival, which is taking place this year as an online-only event, after plans to debut the feature at fall festivals and the Berlinale were impacted by the pandemic (it was selected for the Berlinale, but screened to an industry-only audience this week).

“It’s a strange and lovely coincidence to have my film premiere at Glasgow,” added the Scottish filmmaker, who previously made historical action drama The Eagle with The Mauritanian star Rahim in and around the city.

“But we’re going to see more of this kind of thing if film festivals and cinemas remain shut. The whole idea of what is a premiere, what’s an appropriate place to launch something changes quite a lot when you when you don’t have those geographical barriers.”