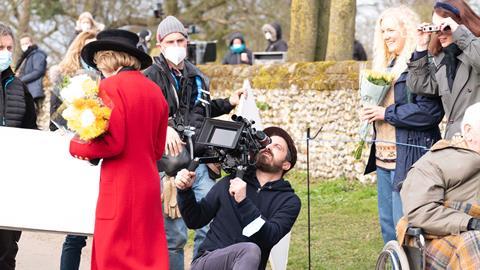 Making ‘Spencer’: producer Paul Webster on the most difficult shoot of his career

Shooting an independent film about Princess Diana was never going to be easy. But add in Covid and Brexit, and UK producer Paul Webster faced “the hardest thing I’ve ever done” with Pablo Larrain’s Spencer.

At a breakfast at The Ivy Club in London in early 2018, Chilean filmmaker Pablo Larrain and his producer partner and brother Juan de Dios Larrain came together with UK producer Paul Webster and writer Steven Knight to talk about Pablo’s idea to make a film about Princess Diana. The group had been looking for a project to collaborate on for a while. “And Pablo said he couldn’t get Diana out of his mind,” Webster recalls. 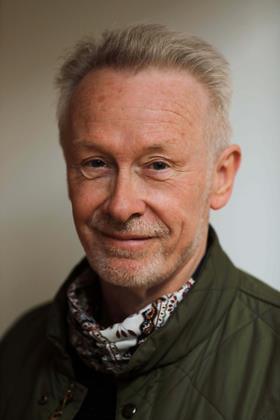 Whether he came up with the idea on the spot or had been mulling it over Webster does not know, but he recalls that Knight pitched the idea of setting the film over one Christmas at that lively breakfast conversation. “Over the course of an hour, we developed the idea, and it is pretty much how the film is now in terms of the three-day structure and the idea that this woman arrives at what will be her last Christmas at Sandringham with the royal family in a state of some distress,” says Webster.

Such an upbeat and productive early morning meeting provided no dramatic foreshadowing for just how difficult the shoot for Spencer — which will premiere in Venice Competition — would turn out to be. “It’s the hardest thing I’ve ever done,” admits Webster.

He doesn’t say that lightly. Webster is one of the UK’s most experienced producers with credits that range from The Tall Guy (1989) and Romeo Is Bleeding (1993), through a stint as the head of Film4 to the founding of Shoebox Films with Guy Heeley and director Joe Wright in 2011, making features such as Knight’s Locke (2013) and, most recently, Marjane Satrapi’s Radioactive (2019).

“I said to Juan that we should try to make this movie the old-fashioned way,” Webster explains. “He agreed and suggested we bring on Jonas Dornbach of Germany’s Komplizen Film, with whom he and Pablo [through their production outfit Fabula] had worked on A Fantastic Woman. That gave us the potential to access soft money out of Germany.”

The Larrain duo, Dornbach and Webster decided to fund development themselves and then hire a sales agent to pre-sell the film internationally. Knight delivered his script in mid-2019. CAA Media Finance and Endeavor Content came on board to handle US rights, with FilmNation taking international. Kristen Stewart signed on to play Diana just before the pandemic-delayed Cannes virtual market of 2020, where the project sold out. 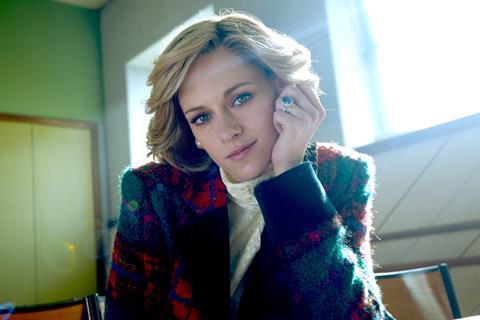 Securing their lead actress had not been easy. “We had conversations with a couple of actresses who shall remain nameless, both of whom loved the script and Pablo,” says Webster. “Then they both passed. I think the reason was a fear of the potential controversy depicting this very visible woman. It’s very challenging for an actress to play somebody with such visibility. Diana is arguably the most famous woman of the 20th century.”

Pablo Larrain’s next suggestion was to approach a US actress, namely Kristen Stewart. “We all thought that was a very good idea,” says Webster. “[As an American] she would not have the baggage that others more intimately connected with the UK would have. It was about finding somebody who could free themselves of the shackles of the public persona. And Kristen is completely fearless.”

When it came to the traditional financing plan, the idea had originally been to match German soft money with similar financing from the UK via support from the BFI, BBC Film or Film4 that would allow the producers to retain control of the film. “We went to all three and they all loved the script — and none of them put any money in. It took the BFI eight months to say no,” says Webster.

“[BBC Film head] Rose Garnett was a big champion,” he continues. “She was enthusiastic about the notion but William and Harry are young in the film and, even though there is nothing particularly controversial about their portrayal, she needed [the] BBC compliance [department] to sign off on that. And they did not.

“In another world I would have been royally pissed off at that. But I wasn’t. Nor should we be. The BBC is under such pressure. They have had such a kicking over the years and they are one of the great media organisations in the world and we should be proud of them. So, fair enough, not this time.”

It was decided to shoot the majority of the film in Germany, mostly the interiors of Sandringham Palace. That meant the project could access support from various national and regional funds including the German Federal Film Fund (DFFF), Medienboard Berlin-Brandenburg, German Federal Film Board (FFA), Film- und Medienstiftung NRW and HessenFilm und Medien. Exteriors would be filmed for one week in Norfolk and London, making the project eligible for the UK tax relief.

“But, of course, Covid came along and made things awfully complicated,” says Webster drily. “We wanted to make the film right away because of Kristen’s availability and that meant we were going to try and make it during the pandemic.”

The big challenge was finding a bank to cashflow the film. Paris-based Cofiloisirs came in but was nervous — nervous of Covid shutting down the shoot and nervous of traditional distributors buying the film on a territory-by-territory basis at a time when cinemas were closed all around the world. “Cofiloisirs brought in the insurance themselves and worked with Commerzbank in Germany to co-fund the film,” says Webster.

But another crisis loomed thanks to the fallout of the UK’s withdrawal from the European Union on December 31, 2020. One of the bank’s own insurers pointed out the project was not presently qualifying as European under its own cultural test requirements. By a stroke of luck, it was discovered Jack Nielen, the young UK actor cast as Prince William, also held a Dutch passport. Crisis averted. (Webster is at pains to underline Nielen was Larrain’s first choice to play William: “He was the best kid we saw and he was our original choice.”)

But the challenges continued to come. Shooting during the pandemic for 32 days in January and February 2021 at a castle near Dortmund with Covid-safe health protocols was compounded by a travel ban on people moving in and out of Germany.

“The German authorities were very supportive but it meant all the actors had to stay the entire time. Even if they were only working for a week they had to stay and were not allowed to go back and forth,” says Webster. “That put a lot of pressure on the actors and our budget. It was an expensive way to make a movie — this is an independent movie, [budgeted at] less than $20m — and it proved incredibly difficult managing things. There were a lot of hidden costs that we couldn’t anticipate — due to Covid delays, due to the bureaucracy, things not arriving and all that kind of stuff.”

While not as much as 20% more, he describes the extra costs as “substantial”. The Brexit factor caused further headaches with delays in shipping materials and goods to Germany from the UK. Everything was held up at customs.

Webster did save on his expenses as he took the difficult decision not to travel to Germany as he was not yet fully vaccinated. It was the first time Webster had not been on the set of a film he has produced. He is sanguine now he is out the other side of it. “I have two good partners and it was a very well-run production,” he says. “And Pablo is an extremely respon­sible filmmaker. But it was difficult.”

Back at the 2020 virtual Cannes market, the film’s headline deals were a joint pick-up by Neon and Topic Studios for the US and STX’s acquisition of key territories including the UK, France, Italy and Benelux. DCM is releasing in Germany. The team had conversations with the streamers about fully funding the film but Webster is confident the right choice was made. “It was so difficult making this film, and I often think we should have taken one of the offers [from the streamers],” says Webster. “But our partners have been great and it’s worked out. But it was very, very risky.”

The Spencer team’s ambition was always to make a film for theatrical release. “I am a huge supporter of cinema­going and it’s given me an amazing career,” says Webster. “I would like to give back and try and support it as much as I can. Pablo was also absolutely committed to making a film for the cinema. If we can retain the theatrical experience, everybody benefits — the audience, filmmakers and culture in general. It’s not an experience you can replicate, no matter how sophisticated your home entertainment system is.”