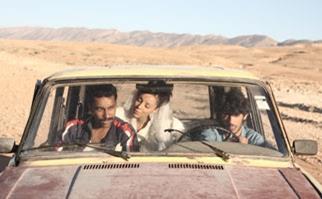 Genuinely amusing, if not downright funny at times, Lyes Salem’s biggest asset in Masquerades is himself, playing the pop-eyed, misguided, at times quite delusional Mounir, de facto head of a small but troubled family in a dust-ridden Algerian village where nobody takes him seriously. Light and low-budget but consistently charming, the accessible Masquerades could well prove to be a decent-sized hit in co-production territory France where Haut Et Court is distributing, and at least amongst the North African diaspora elsewhere (Spain and Italy in particular). Some form of TV exposure in all markets also seems likely.

Even when his character is behaving badly, Salem’s expressive, outraged face - oddly reminiscent of a doe-eyed Borat - means the viewer is almost always on his side. And from the opening tracking shot, it’s clear that Salem the director is talented and ambitious, yet comfortable with and commercially sensitive to the genre limitations of a wedding farce.

On a bride’s big day, it is the local custom to rent a flotilla of tinted-window SUVs from village big-man The Colonel (frequently mentioned, but never seen) and wheel noisily around the ‘centre of town’, coating all-comers in dust. Mounir, inexplicably clad in an England nylon tracksuit throughout, can only look on forlornly: he knows nobody would take on his narcoleptic sister Rym (Reguieg), and her tendency to fall asleep at important moments has made him a laughing stock in the village. He works as a gardener for The Colonel and calls himself a ‘horticultural engineer’. His wife Habiba (Takoucht) loves him, but ignores his attempts to assert his authority.

Unbeknownst to Mounir, Rym has been seeing his best friend Khliffen for the last four years, but the hapless Khliffen is too afraid to ask for her hand.

One night Mounir gets staggeringly drunk and declares to the village that a rich foreigner has asked for Rym’s hand. It’s a fiction, of course, but Rym decides to play along in an attempt to force Khliffen’s hand, and soon the game spins out of control. Mounir has become a big man in the town and gifts are flooding in through their door, but not only is his prospective brother-in-law not a Muslim, he doesn’t actually exist.

Wisely, Salem has kept this to a brisk 92 minutes and found himself a sympathetic, good-natured team of actors to keep the ball rolling, which also includes Mourad Khan as Redouane, his suspicious next-door-neighbour-turned-best-friend. The score is whimsical, but not obtrusive; Masquerades’ script is surprisingly tight, and technically the venture is assured. Undoubtedly, Masquerades marks Salem out as a talent we’ll certainly be seeing more of; and if his next work is as genial as this, the pleasure will be all ours.