Independent UK producers are increasingly branching out into high-end TV drama, driven by financial and creative opportunities. Is this the golden goose for the indie film sector? 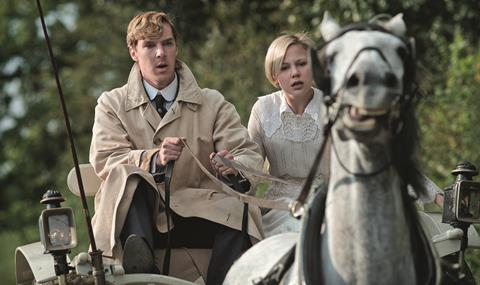 “I do television to feed my film habit,” one UK producer recently quipped. His point was clear. High-end TV drama can be much more lucrative and straightforward for independent producers than feature films. Some producers now see TV production as a way of underwriting their film work, which is riskier and potentially more fraught.

The actual business of making a high-end TV drama is not that different from shooting a film. Film-makers will need a slightly different address book but will be using the same cameras and crews. The old snobbery that the film industry used to feel about TV has vanished. “In some cases now, the budgets for high-end television are better than the budget for the average independent film,” notes producer Kevin Loader of Free Range Films.

“Physical production is very, very similar,” agrees Ivan Mactaggart of Trademark Films, which has produced TV projects such as Parade’s End as well as films including My Week With Marilyn. “In terms of physical production, there is very little difference between the two worlds, particularly because we’re no longer talking about whether we’re shooting on 35mm or on tape. Everything is being shot on high-def cameras. In production value, the results are very similar.”

Look at the bottom line, and high-end TV drama can appear infinitely more alluring than film. The terms of trade are better - producers can hold on to rights more easily. They do not face the daunting amount of paperwork common on feature films financed by multiple partners, which can require hundreds of legal documents. Nor do TV dramas need completion bonds. A strong broadcaster or VoD giant is likely to put up the majority of the financing - or sometimes even to fully fund the project.

“That’s why there is such a stampede [towards TV drama],” says Loader. “You can still make these things and retain a huge amount of ownership inside your production company. That’s why every single production company is developing long-form television.”

The Man In The High Castle

Some producers argue the business model for independent film production in the UK is no longer sustainable and that to run a business in the film industry is “impossible”. Even on successful UK indie feature films, they point out, very little money trickles back to the producers. “On an average £5m-£6m [$6.5m-$7.8m] British film, you as producer will never see any back-end,” says Loader. “There are too many people between you and the transactional moment - sales agents, investors, distributors, cinema owners. There are too many people in the way.”

Loader cites Roger Michell’s Le Week-End, which he produced, as an example of a UK film on which the rewards were minimal. Made on a modest budget of around $1.95m (£1.5m), the film sold widely internationally. Investors made their money back but there was no upside for the film-makers and cast, who had deferred much of their salaries. “If you have to make those sacrifices and the film does quite well, and you’re still not making any money at the back-end, something has gone wrong with the model,” he says.

Stewart Mackinnon, founder of Headline Pictures, recalls reading an article that trumpeted the box-office success of Dustin Hoffman’s Quartet, which was produced by Headline. The film had made $70m at the global box office but, while on paper it appeared very profitable, it brought little back to him as the producer. “We’ve not received one penny in returns in spite of spending months with lawyers negotiating the percentage of back-end and the share of corridors,” he says.

Producer Elizabeth Karlsen, who heads Number 9 Films with Stephen Woolley, observes that anyone working in UK indie film is not “there for the money”. Karlsen and Woolley have been running Number 9 since 2002. “We’ve done some work we’re really proud of,” she says. “Some of the films we’ve seen back-end on, and some we haven’t. There are horror stories out there and it is difficult.”

There is an obvious economic imperative for producers in trying to make high-end TV drama. Equally important for many are the narrative possibilities of long-form television - the sense that this may be the arena in which film-makers can now do their most adventurous work. Netflix and HBO are not driven primarily by ratings. They want their shows to be cutting-edge, not bland or sanitised. That means there are not censorship issues or front-office interference, and producers are given creative freedom.

It is the aesthetic possibilities rather than the commercial upsides that are now drawing Number 9 towards long-form, high-end TV drama for the first time. The company recently announced it was making its first foray into TV drama with its adaptation of the Henry James novel The Portrait Of A Lady, to be scripted by Rebecca Lenkiewicz (Ida). Its partner on the project, Studiocanal, put Number 9 in touch with Nicola Shindler at independent TV drama production company Red. No broadcaster is attached yet but production is likely to begin in late 2017.

“I think he [James] is a wonderful writer and Isabel Archer is one of the great characters of literature. I felt that the long format, being able to tell that story in five or six hours, would be very rewarding creatively,” says Karlsen. “It’s a big novel and when you have to squeeze something into a two-hour film, there are certain restrictions that are imposed.”

Karlsen insists Number 9 “is never going to stop making films. It’s just in our DNA.” Nonetheless, citing Susanne Bier’s recent Emmy for BBC-AMC’s The Night Manager, she observes that television is “far more successful at diversity on every level. That is really attractive to me as a woman working in the industry.”

Until recently, many film sales agents scorned actors from the small screen trying to break into feature films. Most TV names carried little weight in the international marketplace (George Clooney, who successfully made the transition from TV to film, was a rare exception). Now, those same sales agents are desperate to have actors from TV dramas such as HBO’s Game Of Thrones or Breaking Bad in their films. The irony is that these actors are increasingly difficult to get, as they are often tied up in their TV projects for months if not years. When there are breaks in their schedule, the competition to cast them is intense. It does not help that indie producers scrambling to put together their budgets cannot always guarantee precisely when a film will be greenlit and start shooting.

Producers with long experience of working in both film and television strike a cautionary note, warning that it is naive to regard TV as some sort of promised land. High-end TV drama poses its own challenges. There are certain rules for long-form dramas in the international market. One is that European broadcasters tend to want a minimum of 10 to 12 hours (the tradition is for a six to eight-part series in the UK). UK producers enjoy exceptional terms of trade. However, in order to make ambitious international projects that have the chance to compete with big-budget US TV drama, they will often have to co-produce - and that is likely to mean giving up rights, pre-selling and sometimes gap financing. In other words, they might end up following the same financing formula as on their films.

“You enter into other territories that, unlike the UK, want to hold on to rights. The typical long-form drama looks almost identical to the funding structure in the movie industry,” says Mackinnon. “If you’ve had to pre-sell the world to get the series made, then you’re relying entirely on fees.”

The upside is that producers make more in fees for a drama series consisting of 10 one-hour episodes than they do from one 90-minute feature. Successful TV drama has a very long tail. It can be exploited on multiple platforms. Consumers are ready to pay more for a box set than for a film. It helps, too, that TV is heavily regulated and is more transparent than film. Revenues are easier to chase and the accounting is less opaque. “You will know that a TV drama has gone out in Japan on Channel 2 on a Thursday and you can look at the figures,” says Mackinnon.

Headline Pictures is the producer on Amazon Studios’ Philip K Dick adaptation The Man In The High Castle. For Mackinnon, working with the US streaming giant has been an eye-opening experience. Amazon was able to pay for the entire show with a single cheque. “They are developing shows for that international market. One single cheque paid for the show. It’s like a studio model. They buy world rights. It’s the antithesis of the European model in which the budget is cobbled together. It’s basically a buy-out,” the Headline boss says.

Mackinnon was startled when Amazon’s execs declared they were “all confident” they could make 50 hours of television from Dick’s relatively slender novel. He expresses awe at the speed and “breathtaking” skill with which The Man In The High Castle was put together. Around a dozen writers worked on it along with half-a-dozen directors and a team of editors. He points out, though, that the drama has a very American sensibility. “Inevitably, the editorial from an American company is going to carry into that show an American perspective,” he says.

Some believe that high-end TV drama is losing its local flavour. Big-budget international productions are likely to be shot on multiple locations and have casts from many different countries. “I guess that’s the danger of them. Are we going to see a world in which, bizarrely, independent movies represent the cultures in which they are born and the long-form television serial just becomes this glossy international product?” wonders Loader.

There is no sign that UK producers are turning their backs on cinema. Mactaggart expresses what many other UK producers feel about the different attractions of film and TV. “David [Parfitt, Trademark Films producer] and I love film,” he says. “We got into this because we want to make great films. It’s not just what is the most sensible business decision. It’s also about having a diverse business and not being exposed to the ups and downs of one particular market or medium. It’s picking the right medium for the right story.”