The globetrotting film exec turned festival director reflects on a year spent grounded, watching whales from his home office and the formative influences of Wendy Palmer and Michael Kuhn 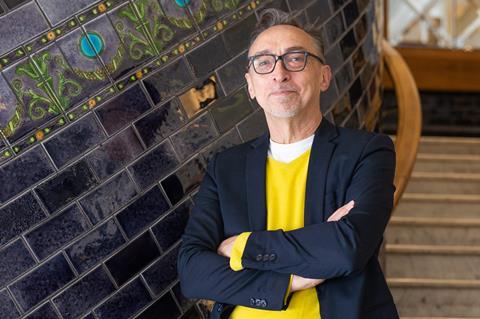 Taking over as director of New Zealand International Film Festival in 2019 meant a move home to Wellington for the then Amsterdam-based Marten Rabarts, back to a country he had left when he was 16.

The pandemic has meant he has stayed put for the past year, which has allowed him to connect more deeply with his family and the land — he is part Maori. Rabarts had spent the previous five years heading up EYE International — which promotes and markets Dutch films internationally — at Amsterdam’s Eye Filmmuseum and was previously head of development and training at the National Film Development Corporation of India.

Prior to that stint in Mumbai, Rabarts spent five years as artistic director of the Amsterdam-based Binger Filmlab, backing projects as diverse as Michael R Roskam’s Bullhead, Jennifer Kent’s The Babadook and Adina Pintilie’s Touch Me Not.

How has your working life adapted to the pandemic?
We’re lucky to live in a country that has kept the pandemic under control, with rare lockdowns now lasting only a week or so. I can mostly work in my festival office above a restored 1920s picture palace. We still feel the pandemic on our doorstep as the grand old Embassy Theatre [in Wellington, where the festival has its offices] is only operating on weekends without the studio tentpoles that normally fill it. But my work has never been restricted to one place. Hotel rooms, airports and film festivals have often been my office.

What do you miss?
Half-shouted conversations with filmmakers and colleagues debating the latest cinema in the gaps between screenings — often over a drink.

What is it like working from your house?
I live on the south coast of Wellington looking across the Cook Strait to South Island. A laptop at my kitchen table means I can occasionally be distracted by dolphins and orcas but I do limit my posts on social media, so as not to be tone-deaf. My partner, an epidemiologist, [has been] kept very busy in a spare bedroom/office.

Do you have rituals that signal the beginning and end of each working day?
Cooking an evening meal in a short period of time provides a sense of achievement that isn’t always forthcoming as a festival director.

What was your favourite film growing up?
Star Wars. But a little later Vincent Ward’s Vigil (1984) transformed my sense of self as a New Zealander. We are quite Scandinavian through his sober lens.

What was your first job in the film industry?
Assistant editor on Molly’s Pilgrim, a children’s film that won an Oscar in 1986 for best live-action short. I was in New York City. Yes, I was splicing celluloid.

Who helped you most when you first started out?
Sales diva [and fellow New Zealander] Wendy Palmer and [former Polygram CEO] Michael Kuhn, who took me into Polygram Filmed Entertainment [in London], which was my film school campus.

What are you most proud of professionally so far?
The role I’ve been able to play in the creative development of some really talented filmmakers over many years.

What’s the biggest mistake you have made and learned from?
Never believe you are what your business card says because when your job changes, some of your network will disappear overnight and you only have yourself to rely on.

What is your favourite festival or film event?
The Sarajevo Film Festival is a second home. It’s relaxed and everyone’s very accessible. It’s sobering that the festival’s birth was a cultural response to the siege of Sarajevo — celebrities have to check their stardom in at the airport. The main venue was originally chosen because it was the only place a large audience could gather without risk of sniper fire.

What excites you about the future of filmmaking?
Emerging and established voices telling us about the state of the world and the human condition. As always.

What is the biggest challenge facing film?
Ensuring proliferating content platforms and bricks-and-mortar cinema circuits each play a role in the ecosystem without threatening each other.

What book are you reading?
The Savage Coloniser Book by Tusiata Avia — a rage-filled poetry collection.

Is there an under-the-radar TV series you recommend?
I’m not sure if it fits but We Are Who We Are from Luca Guadagnino.

Where do you go to unwind?
To a little beach shack on North Island’s Coromandel peninsula. It’s been in my family for generations, totally off grid, no phone coverage.

Who would play you in the film of your life and who would direct?
Timothée Chalamet and Jane Campion. There’s a bit of An Angel At My Table in there.