My Screen Life: Universal's Veronika Kwan Vandenberg on meditation, mentors and where she wants to be in five years

The international distribution supremo describes watching The Towering Inferno as a child in Hong Kong, what she learned from legendary studio execs Alan Horn and Ed Frumkes, and who would direct the movie of her life. 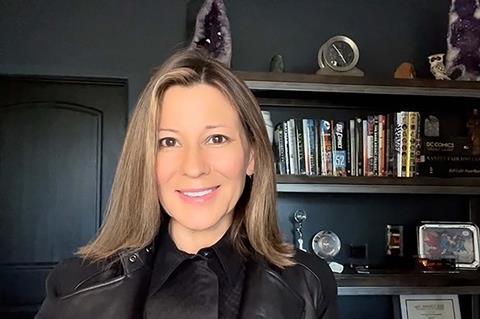 Los Angeles-based Veronika Kwan Vandenberg joined Universal Pictures International (UPI) as president of international distribution in June 2020 after nearly 30 years at Warner Bros. At UPI, she has spearheaded the global releases of blockbusters Fast & Furious 9 and No Time To Die, and is now strategising the campaigns for awards hopefuls including Belfast, House Of Gucci, Cyrano and Licorice Pizza, as well as the Christmas rollout of Sing 2. All this with an eye on summer 2022 releases Jurassic World: Domination and Minions: The Rise Of Gru.

No wonder she likes to meditate.

I work out of a small space with wide open doors looking onto the back garden. I have a monstrous desk with a crank that my husband made out of a vintage drawing table. Behind me is a Timothy Oulton bookshelf with movie memorabilia and books as well as crystals and photographs. There’s also a large vintage Italian poster of Cat On A Hot Tin Roof. Oh, and a Peloton treadmill I never use.

I start the work day long before I get to my desk. I get straight to my emails and then begin my morning routine and get my daughter ready for school. By the time I get to my desk, I am ready to start my meetings. I drink a lot of green juices and chai latte.

As a marketing intern at Lorimar in the international film department. I was a foreign student at Loyola Marymount University [in Los Angeles] and was interested in staying and working in the creative industries and had a friend working at Lorimar. It was a long process of starting out there, getting my work visa and being offered a job at Warner Bros as a sales analyst trainee.

I’ve always admired Donna Langley [chairman, Universal Filmed Entertainment Group] from afar and now I get to see her in action. You want to do well by her. Back in the day, my greatest mentor was Alan Horn [former president and COO of Warner Bros]. He led by example, was gracious to filmmakers and executives alike, cared about the quality of the work, and treated everyone with respect.

My first boss at Warner Bros was Ed Frumkes. He taught me everything about the business. He had me sit with him for hours, listening in on his conversations. He gave me a tremendous amount of responsibility from the get-go and he let me run with it.

I grew up abroad so all the movies came to us later than in the US. I was born in Hong Kong and then I lived in Lebanon. From there we went to Germany, and then I was in Bahrain for a period. I went to boarding school in France and graduated from high school in Amsterdam. My mother is German and my father is Chinese and my stepfather was Lebanese. I loved spaghetti westerns, Once Upon A Time In The West was one of my favourites. When I was living in Hong Kong, The Towering Inferno came to cinemas and that was my first experience of a popcorn blockbuster.

On a spiritual quest around the world. I love to meditate and do yoga. It’s always been my dream to get away and spend a long time immersed in different cultures, spiritual settings, hiking distant trails. One never finds the time in life due to work, family and children in school.

The evolving landscape. The business has not changed for a long time and we’re living in a time that is allowing us to try out new things.

I would probably write. I used to write a lot when I was growing up. I always have a lot of stories in my head.

I meditate. I take long walks with my dog and my husband. We got a puppy during Covid and he’s my little baby. He’s a golden retriever.

Sandra Bullock, with a lot of comedy, and Nancy Meyers to direct.