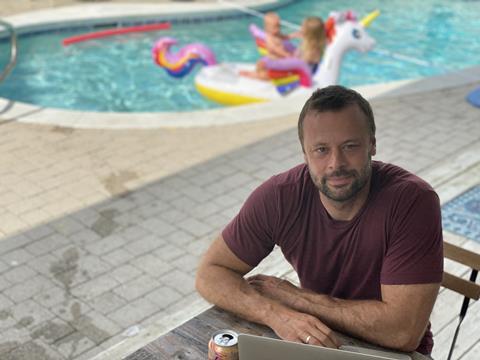 Florida-based Danish producer Lars Knudsen has created a string of horror hits over recent years, including Robert Eggers’ The Witch (2015) and two features by Ari Aster, Hereditary (2018) and Midsommar (2019).

Last year he launched production partnership Square Peg with Aster. The director’s next film is among their projects, as well as an English-language remake of cult Korean film Save The Green Planet! with Parasite producers CJ Entertainment, to be directed by the original film’s director Joon-hwan Jang.

Knudsen was days away from starting to film in Northern Ireland on The Northman, the third film from The Witch director Robert Eggers, when the coronavirus lockdown shut down all production in the UK and Ireland.

How has your working life changed in the past few weeks?
My mentality towards my working life hasn’t changed. After a while, as a producer you get hardwired to prepare for failure and be ready for success.

That said, the biggest physical change in my working life was having to go on hiatus on March 12 on The Northman. We were one week away from filming in Belfast after 15 weeks of prep, our actors were there and this incredible Viking world that Rob had created was close to becoming fully realised. We were so close. But Rob and I have a fantastic partner in Regency [producers New Regency Pictures] who are as committed as we are to get up and running again as soon as it’s safe to do so.

How are you maintaining an office routine?
My normal office routine hasn’t changed much. About three years ago, I left New York for Florida where my wife is from so I’m already used to working from home and being more reliant on phone, email and video conferencing than in-person meetings. However, pre-pandemic I had the ability to easily fly to New York or LA as needed.

I have a company, Square Peg, with Ari Aster and we talk daily and have set calls twice a week to more thoroughly talk through our slate of projects that we are developing and producing.

What are you working on?
Even though we are on hiatus, we are still doing weekly HOD calls on The Northman and doing what we can to get ready to go back into prep when the time is right. The goal and hope is to be able to start production this year. I’m proud of how Rob is handling it and using this time to be even more prepared.

Ari and I are using this time to get several of his feature and TV projects developed so we’ll be stocked up on originals from him for a while once we get out on the other side of this, and then we have a dozen or so films in various stages of development that we are producing with other writers and directors. It’s been quite a change going from hardcore prep to focusing entirely on development in a matter of weeks but it’s been good — and distributors and financiers have been engaging with us so I expect that we’ll have two or three projects set up for 2021 during this time as well.

Ari and I are also using this time to get our foot into TV in a real way which is really exciting. Fingers crossed on that.

How are you and your collaborators keeping up morale?
Don’t watch cable news! We can’t control what has happened, but we can control how we respond to it. That attitude no doubt has helped in keeping morale up and resulted in us feeling that we’ll be able to use this time to get our company to a really exciting place once things get back to normal again.

And with Rob on The Northman, the key to keeping up morale has been to keep talking about the movie. Anything big or small. What things can we continue to work on and push on. He’s in daily contact with his HODs. There is a real feeling that we are all in this together and that no doubt helps in keeping spirits high.

But the main thing that has kept up my morale has been being able to spend a ton of time with my family. My wife, Amy, who manages Sasha Lane and is also a close collaborator of mine was working and alone with three kids while I was in Belfast, so I am happy to be back and make up for lost time with her and we have the most amazing little seven-month-old boy who I’ve missed terribly.

What advice would you give to filmmakers who are worried about the future?

The advice that I’d give to up and coming producers is to use this time as a way to hone your skills. Producing is a job that is filled with uncertainty and a lot of ups and downs. I think it’s important to not get lost in the chaos of it all and learn from it, remain calm, adapt, and improve in whatever way you can because if you do so, once this passes you will come out of it a better, more adaptable producer.

I am also very fortunate that I have a partner who is a writer/director. All Ari is doing during this time is writing, writing, writing. If you are in a similar position use this time to develop as much as you can. Stay productive.

How are you managing to keep your children entertained/educated?
My wife and I have a house full of kids. She has a 10 and 15-year-old. We have a seven-month-old and I have a seven-year-old daughter in Denmark so the days are filled with organised chaos. We can’t really control it, we just go with the flow and make sure that they are doing their school work and not dying from boredom.

What are you watching, and reading, and listening to, to get you through this time?
I’m prioritising scripts that we are developing or considering and movies by filmmakers that we’d love to work with but every morning when my son wakes up at 5 am and he eats or naps on me I’ve made it a habit to watch or read something that I’ve always wanted to see or read but for whatever reason haven’t gotten to. This week I finally watched Park Chan-Wook’s Thirst which I loved and The Last Dance, the documentary series about Michael Jordan. And I’ve been reading up on the Greek tragedies. Those plays are so foundational and beyond awesome – I can’t recommend them enough.

What positive change might this crisis bring to the industry?
I hope it serves as a reset button for a lot of people and that people in this industry that work too much or often are away from their families make up for lost time and reassess their priorities in life.

I do firmly believe that we will all bounce back from this. We will be entering into a time of uncertainty for a bit but things will go back to a new normal — and I can’t wait to get our entire cast and crew together in Belfast again on The Northman. It’ll be a time for celebration when that happens and everyone will have a different kind of appreciation for what we do and that will no doubt show on screen.