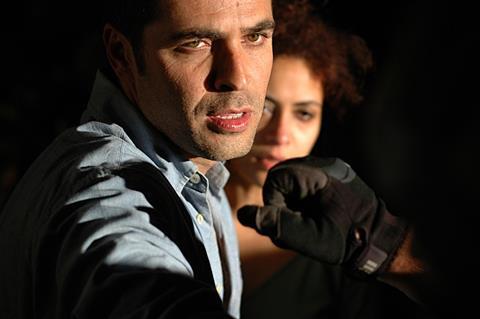 Pomegranates And Myrrh is a technically-strong feature debut from Palestine, a romantically-infused tale of love and life in a besieged Ramallah which could charm a more general audience. It boasts all the soft hues, bright colours and heady longing of the Eastern Mediterranean, although its take on the political issues it chronicles manages to be both defiant (the film itself is dedicated to Palestine) and frustratingly superficial.

More convincing during the viewing than afterwards, when some unsatisfactorily plot strands start to grate (Ramallah and no sign of Hamas’), Pomegranates could also have done with a less-passive female lead to give the film’s trajectory more weight - Hiam Abbas, in a cameo, is so much more powerful than an entire film’s worth of newcomer Elmasri. Notices will be good to mixed, but the film itself and its young director are bound to attract coverage in any territory where it opens, thanks to the Ramallah-shot sequences and politicised subject matter.

Pomegranates starts off colourfully and intensely, as groom Ziad (Farah) attempts to enter East Jerusalem to marry Kamar (Elmasri); both are of the Christian Arab minority. He drives by the separation wall, through a jittery checkpoint, and the situation in which they live is immediately and skilfully conveyed by Najjar. Kamar is a dancer of traditional Palestinian folk dances, and seems not entirely at home in her new husband’s olive farm, although this could be a simple case of newly-wed discomfort. He is certainly in love with her.

All this changes when the Israeli army violently begins the settlement process on Ziad’s farm, first by confiscating it for an alleged stone-throwing incident and then placing Ziad under administrative detention. Now Kamar is left to cope with the fallout, and she turns to dance to the disapproval of her in-laws, swapping smouldering glances with choreographer Kais (Ali Sliman), himself a Palestinian returnee after 20 years of exile.

As a director Najjar has a strong sense of structure and editing; cinematographer Valentina Caniglia completes her vision with memorable images. For the viewer, Pomegranates feels like the work of an experienced, mature director, tackling large issues with skill and precision. But as a screenwriter (this participated in the Sundance Lab), her central love triangle is never satisfactorily sketched or resolved - far too much depends on the glances and internal emotions of an inexperienced cast.

Politically, the type of audience which would attend a film about life in Ramallah would probably ask for a better degree of shading even if the film is, as Najjar positions it, the agonised shout of a nation under siege. Geographically, you’re never quite sure where you are in Pomegranates, and politically, there’s no sense at the end that you know any more than you did going in.

Still, Pomegranates And Myrrh is both accessible and remarkably well-made - not just for a film from this region, but anywhere. The director has a strong and seductive voice, and undoubtedly we’ll be hearing it again.