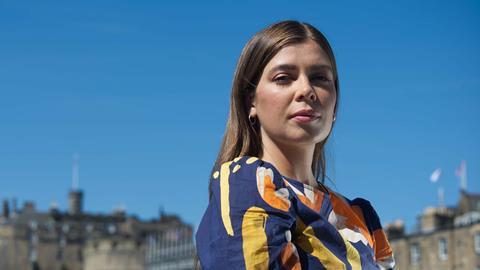 “I always approach every story by thinking how best that story would be told. What form would the story work well in? Would it work well in theatre, would it work well as a feature film?” says Josephine, who is originally from Glasgow and now lives in Prestwick.

“I think of form being essential for the story rather than the other way around, and performance comes into that,” she adds. “If it’s my story, then it’s sometimes better that I’m performing it.”

When workshopping her theatre script with a set designer and a couple of the actors, there was an idea that the power dynamics of the story could be told through positioning the actors at different levels on the stage, depending on the power they had at any point in the script.

“I would never have come up with that unless I’d had my set designer in the room,” Josephine says. “I am interested in exploring with Des [Hamilton] this idea of having these really intense rehearsals. Maybe also film them.”

Josephine recently submitted a poetry book and is writing a children’s book about bisexuality with Pop Up Projects’ Rainbow Library, which aims to put more LGBTQ+ books into UK schools. She was selected for Scottish Film Talent Network’s Write4Film 2018 and New Talent Shorts 2019 (filmmakers Lynne Ramsay and Jennifer Reeder mentored her on Groom).

Josephine’s solo theatre shows Hopeless and Daddy Drag sold out across the country. “If I can wake up every morning and have a space where I can think creatively and collaborate with others that inspire me, no matter what it is, I’ll be happy,” she says.