Korean director Shin Su-won is following up her second feature fiction film Pluto - a gritty high school thriller that won a Special Mention at the 2013 Berlinale - with Madonna in Un Certain Regard. 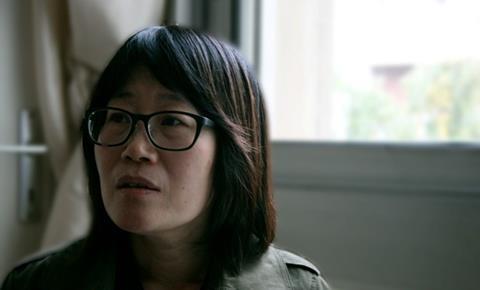 The film follows a nurse’s aide trying to prevent a brain dead pregnant woman from becoming a heart donor to a VIP patient and how she gets to know the intimate details of the woman’s fall from ordinary office worker to homeless prostitute in the process.

Madonna is set for its world premiere on Wednesday; Finecut is handling international sales.

What made you want to do this particular story?

For a long time, I wanted to tell a story about female temporary employees and the uncertainty and anxiety they face. I was in a neighborhood café scriptwriting when a college-age girl came in. She didn’t look like she’d be homeless - she looked like she’d be a good student, but her hair was a mess and she just came in and sat there without looking up. I wondered how she got to be that way, and thought about how I could become that way, too.

And then I heard about nurse’s aides, stories from hospitals and how people are sometimes kept alive meaninglessly. In a hospital’s strict hierarchy, the nurse’s aides are at the bottom. So that with the story of a homeless girl naturally fell into place.

Tell us about the title Madonna.

I’d heard about a factory worker called Madonna because she was fat and had big breasts, and the other workers shunned her because she had a tendency to dress too revealingly.

At first I thought of sexy pop singer Madonna, but then I also thought about the holy Virgin Mary. In a male-centered society where women are objects of consumption, motherhood is as much a way of confining women as sexy images are.

I thought of a pregnant prostitute and how one woman’s life could be gradually destroyed by society and no one would save her. The person who does save her here is someone in a similar plight, a nurse’s aide.

The film has a lot of scope for a low-budget film. How did you make that work?

I think if you take a lot of money then you have to some degree listen to the people who gave you the money and the way I wanted to shoot this film, I didn’t want the tone to be disheveled because of that. So we went low-budget with most of the same staff as Pluto since they know what I’m like. The production budget was KW400m ($369,000) and Sansoo Ventures invested 70% while Little Big Pictures did 30%. A lot of people helped out - from the hotel set and factory shoots to the hospital equipment and medical advisory roles.

What was it like casting a first-time screen actress in the role of Mina, a.k.a. Madonna?

Casting Mina was the hardest because there aren’t any fat actresses and many refused because they didn’t want to gain weight. Kwon So-hyun was a plump actress who was playing comic supporting roles in musicals. The way you see her in the insurance company scenes is how she looked when we first met. I told her, ‘Sorry, but you’re going to need to put on about 3kg when you start working at the factory.’

She hadn’t even been in any short films, so we rehearsed all her scenes with her partner actors every weekend. On low-budget films, you can’t afford to put a camera on someone and have them tense up because they are new to it. She’s very good at immersing herself. She has a lot of musical theatre experience and she’s very passionate.

You were a teacher for several years before becoming a filmmaker. I think we saw that influence in Pluto, and perhaps a little in this film, too?

I was a teacher for ten years, but not at the kind of school in Pluto. I also did a lot of research. In this film, the part with the brown hair - that was something from when I was in school and a very pretty girl with brown hair would always get scolded by teachers. Ours is such a country for controlling and regulating society. Back then, you couldn’t have brown hair - only black hair, and your school uniform would have to reach a certain number of centimeters below your knees and your hair a certain number below your ears. I’m interested in how our society tries to control and restrict people.