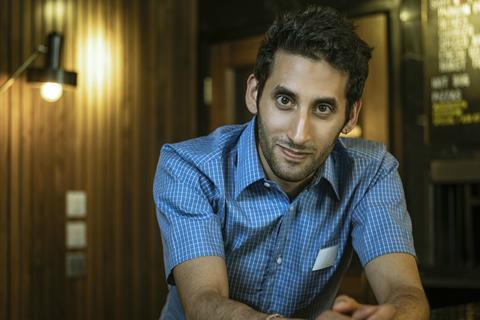 As an actor, screenwriter, director, author, columnist and performer, just how does Amrou Al-Kadhi — who identifies as gender non-binary and uses the pronoun ‘they’ — fit everything in? “I’m a full-time creative. I’m very honest with everyone I’m working with. We set up deadlines between us.”

At the forefront of several current projects is the Film4-assisted Layla, which Amrou is writing and directing, a “contemporary Romeo & Juliet” about two lovers caught between separate sects of the gay community at LGBT Pride in London. Also in the works as a writer/performer is Glamrou with the BFI, centring on Al-Kadhi’s drag queen persona, who has performed to great acclaim (including at Edinburgh Fringe Festival) as part of drag troupe Denim. “It’s basically a musical in which a Muslim drag queen is singing to Allah the whole time.”

TV projects include Beards, a story about a queer relationship, created with Game Of Thrones’ Ellie Kendrick, in conjunction with Playground Entertainment and the BBC.

After parts in films including Steven Spielberg’s Munich, a growing frustration at being offered the same clichéd terrorist roles motivated Al-Kadhi to start writing their own scripts. Their intent was “to use my own experience of being a queer Muslim, and to put it on screen.”

That has come in the shape of four shorts, including Nowness commission Victoria Sin about a female-bodied drag queen, and another short doc, Clash, commissioned by the BFI and BBC. Al-Kadhi’s latest, Anemone, was made with support from BBC Films and Film London, and is about a non-binary Nigerian teenager who becomes a sea anemone. In Al-Kadhi’s words, “It’s queer as fuck!”

Al-Kadhi has written columns and made films about the lack of diversity in the UK creative industries, but how do they find the scene now? “There’s a lot of goodwill… but is there diversity in what people are watching, and want as a ‘good film’? We can change that by having as many diverse filmmakers as possible.”