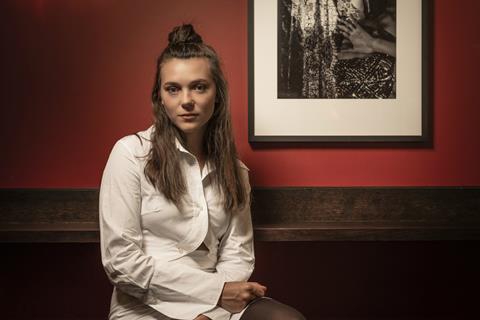 Acting in Edgar Wright’s Last Night In Soho will be something of a change from how 22-year-old Synnove Karlsen experienced the director’s previous film. “I remember going to the Baby Driver premiere when I was unemployed, sitting on my own at the very back, and thinking, ‘Oh my God, this is so cool!’,” she smiles.

Little is known about Wright’s new project, which is understood to be a psychological thriller set in London’s Soho. It started shooting in May with a cast including Matt Smith, Anya Taylor-Joy and Thomasin McKenzie. Karlsen is excited to be working with Wright. “He’s very dynamic and visual, which is such an exciting thing to be a part of,” she says.

Last Night In Soho is Karlsen’s first feature. She received her break when a director saw her singing at her brother’s wedding, which led to her securing the lead role of Holly McStay in BBC Studios’ university thriller Clique. The series follows Edinburgh University student McStay into a seductive world of parties and high-powered businesspeople.

For Karlsen, it allowed her to experience the student life alongside some of her friends who were actually studying in the city at the time. “We did regular club nights, living in halls, meeting all these people and not really being sure of yourself,” says the actress. She has now filmed two seasons of the show, with the second airing on BBC iPlayer from November 2018.

She alternated filming in Scotland with shooting a recurring role in Rome for Lux Vide’s 15th-century historical drama series Medici: Masters Of Florence, in which she portrays Clarice Orsini, an Italian noblewoman who marries into the Medici dynasty.

Glasgow-born Karlsen trained at the London Academy of Music and Dramatic Art (Lamda) and then Guildhall School of Music & Drama, and honed her stage skills with performances at the Edinburgh Fringe. She cites Olivia Colman as an inspiration for the breadth of her roles. “Whatever she does, she commits to it so much. That’s what I aspire to, to look for quality in writing and work and people over exposure.”