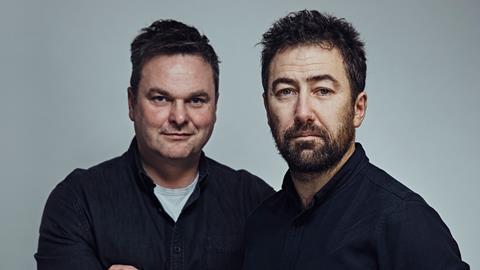 “Our tagline for how we think about things is that there’s decency and civility in everything,” says Adam Patterson of his filmmaking partnership with Declan Lawn. “Sometimes it’s not obvious, but in those spaces can be interesting storytelling opportunities.”

That description applies to The Salisbury Poisonings, a four-part series written by the pair, which premiered on BBC One in June. Patterson and Lawn’s journalism experience — the former as a photographer, the latter as reporter — led Toby Bruce of Dancing Ledge Productions to approach them for the dramatisation of the 2018 Novichok poisoning of a former Russian double agent and his daughter in the English town.

The duo are deeply invested in research. “As soon as we started talking to local people, we thought, ‘There’s a completely different story here that has nothing to do with spies,’” says Lawn. “It’s about the quiet heroism of ordinary people.”

Espionage is, however, part of their first feature film as directors: Chasing Agent Freegard, the real-life story of a British conman who impersonated an MI5 agent in order to swindle multiple women, forcing several to go underground in the process.

The Northern Irish duo have polished a script by Captain Phillips co-producer Michael Bronner, with James Norton to star and produce through his Rabbit Track Pictures. The team is aiming for a spring 2021 shoot. “James has amazing range,” says Lawn. “He’s going to be able to use it all, from really attractive charm to extremely dark, sociopathic behaviour.”

Rough, their first short as co-directors, premiered at the online Belfast Film Festival in April, going on to Galway Film Fleadh. They also wrote two of six episodes for Peter Kosminsky’s cyber warfare drama The Undeclared War, and are in early stages of development on a new drama series for the BBC.

“The world is so chaotic, people are begging for a bit of structure,” says Patterson.

“Everything is so incomprehensible at the moment,” adds Lawn. “If you can tell one true story in an emotionally engaging way, that is as close to the truth as you can get.”