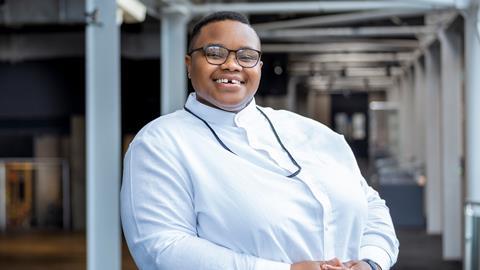 Released in November 2019 in the UK and Ireland, Blue Story — Joy Gharoro-Akpojotor’s third feature as producer — achieved a level of renown many filmmakers strive for across their whole careers.

It rebounded from a controversial first-weekend withdrawal by the Vue and Showcase cinema chains to gross $5.8m (£4.5m), broaching a broader conversation about representation and censorship. “It suddenly became a collective consciousness for a lot of people,” reflects the producer, who was brought to the project by fellow producer Damian Jones.

She is delighted such a broad audience connected with the film. “For some people, that is their lived experience. If you’re white, you can be educated; if you’re black, you feel somebody is talking about your experience.”

Through her Joi Productions, Gharoro-Akpojotor wants to spotlight black, queer and female-led stories. Current projects include Haircut with Film4, a feature adaptation of the 2018 London Calling scheme short she made with writer/director Koby Adom; and debut features from UK filmmakers Matthew Jacobs Morgan, Ronke Adekoluejo, Annetta Laufer and Tomisin Adepeju.

She is also at an early stage on her own as-yet-unnamed feature directing effort, to be produced by Quiddity Films’ Emily Morgan; and is directing a short for BBC Films called The Wedding.

Blue Story reinforced her belief that films can be artistic and popular. “Being commercial just means people are coming to see your film,” she notes. “In five years, I would like to be able to say I’ve created more conversations and more content within these spaces, of what black cinema is, what queer cinema is, what female-led cinema is.”