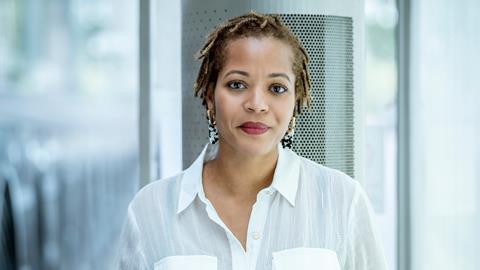 Adapting Malorie Blackman’s sci-fi novel series Noughts + Crosses, about a couple divided by race but united in love, was an ideal fit for Rienkje Attoh.

“I’m interested in supporting those stories, because it’s reflective of me and my family,” she says. “It’s love, but also how power can corrupt. Those themes are exciting.” The six-episode series premiered on BBC One in March after several years in development.

Attoh’s first feature credit was producing National Film and Television School classmate Shola Amoo’s 2016 debut A Moving Image. She followed it up with 2018 drama Pond Life. In January 2021, she is due to go into production on You Don’t Know Me, a four-part series for Snowed-In Productions and the BBC to be directed by Sarmad Masud (My Pure Land). “It’s about a black guy who, because of love, makes decisions that could jeopardise his life,” says Attoh. “You could feel it and see it coming off the page. It was so delicate, almost poetic.” The series represents another return to the BBC, where she worked as a journalist and freelance producer.

On the film side, she is out to directors for Eric And Us, the little-known story of George Orwell (real name Eric Blair) and his love for poet Jacintha Buddicom. Development has been funded by the 2016 BFI Vision Award she received for her company So&So Productions, with Attoh producing alongside Agile Films and Hélène Sifre of Kleio Films.

Four further features are in the works: Enrico Poli’s A Broken Tower about an astronaut, missing for 10 years, who returns to find his wife has moved on; Cecile Emeke’s debut No Telephone To Heaven with BBC Films; Les Cigales, written by Tom Austin with Dolly Wells to direct; and “a big project” with Benedict Cumberbatch’s SunnyMarch and BBC Films.

Multiple plates are spinning for the south London native, who traces an arts heritage back to her Dutch trapeze-artist grandmother and Ghanaian fire-blower grandfather meeting in the circus. “I want people to say, ‘Whatever she’s making is going to be bold, nuanced and engaging.’”