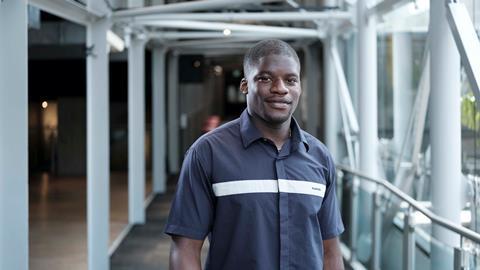 Edem Kelman was born in Paris, to parents originally from Togo, but he moved to the UK as a toddler and is obsessed with capturing the energy of London on screen. “I can’t even write when I’m not in London,” says the 24-year-old. He set his self-funded, low-budget short Princess in Dalston, east London, mixing professional and non-actors in the story of a troubled mother who wants to give her daughter a brilliant day out. “Transport For London is the best casting agency,” he says of finding non-professionals on buses and tube trains.

Thanks to a chance encounter on the street outside the Barbican Cinema, Kelman met TV director Craig Viveiros, who later hired him to direct second unit on ITV Studios series Angela Black. That led to directing five episodes of Hollyoaks, with a powerful storyline relating to unconscious bias and racism in modern Britain. This hardcore cinephile — whose inspirations range from Claire Denis to William Wyler — was not afraid to learn from the episodic world, saying, “[UK] soaps like Hollyoaks are in our DNA, and this melodrama isn’t that far from Douglas Sirk.”

Kelman did not attend film school, instead studying philosophy at University College London and spending all his free time at the cinema.

He is now writing his debut feature Duke, inspired by his parents’ experiences in the West African diaspora in London in the early 2000s. “It’s inspired by my father as this enigmatic figure and the community that forms around him,” says Kelman. Film4 is backing Duke, which he hopes to shoot in 2023, and as a warm-up is also funding his next short, Untitled Coach Story — three interlinked stories showing London “as a city of dreamers”.

Kelman intends to keep showing unexpected sides of the capital. “There’s postcard London and then there’s romance in London,” he says. “And you’ve got to search for that.”