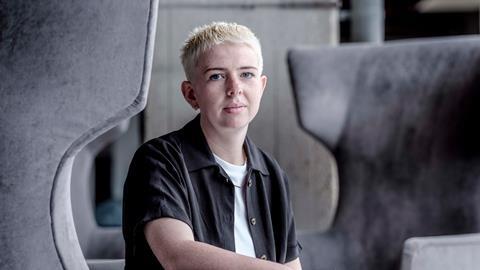 Molly Manning Walker splits her time between working as a cinematographer — she is currently shooting 2020 Star of Tomorrow Charlotte Regan’s feature debut Scrapper — and as a director, with her first feature project in development with Film4. Titled How To Have Sex, it follows three girls on the holiday of a lifetime in Magaluf, with one of them out to lose her virginity. “It’s about how we teach each other to have sex and how peer pressure and the culture of alcohol is linked with sexual experience growing up,” she says. “The characters are funny but it’s a dark, dramatic piece.”

West London-born Walker studied film at Arts University Bournemouth (focusing on cinematography) where she met director Billy Boyd Cape. After graduating, the duo collaborated on commercials and music videos, and Walker found herself working with high-profile acts such as ASAP Rocky, James Blake, FKA Twigs and Wolf Alice. However, after a couple of years she decided to further her studies at the NFTS. “I ended up feeling like I was a one-trick pony as I was DP-ing almost exclusively for Billy,” she says. “I took myself to the NFTS to make sure I was getting a range of directors.”

It was here she met another key filmmaker collaborator, Charlie Manton, with Walker shooting their graduation film November 1st. The short went on to win a prize at the Student Academy Awards and saw her nominated at Camerimage in 2019.

Her work on another short, Bijan Sheibani’s Morning Song, got her noticed by Film4. “It changed everything for me because Film4 loved it,” she says. “They were pushing me as a cinematographer but also asked me to come in and write a treatment.” Instead, Walker delivered a completed draft of How To Have Sex, which now has a shoot planned for spring/summer 2022.

Walker’s own directing debut came with 2020 short Good Thanks, You?, a sexual assault drama starring Jasmine Jobson and Michael Ward, which was selected for Critics’ Week at Cannes. “It felt weird [at first] not holding the camera,” she says. “I see the world through a camera, but I enjoyed it. It was strange but there’s so much crossover. Hopefully I can continue to do both but I’m sure there will be a crossroads at some point.”