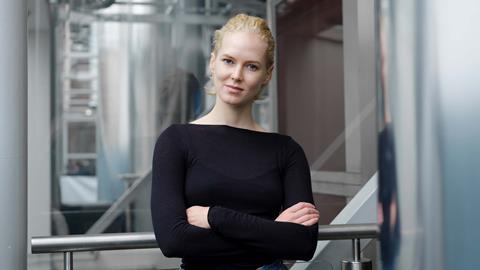 When Rosy McEwen was 13, a casting director came to her west London school looking for young girls to star in Atonement.

She made it to the final two for the role of Briony, losing out to Saoirse Ronan who was later Oscar-nominated. But the experience landed McEwen an agent, setting her on a path that now sees her — at the age of 28 — with her first lead role in a feature film: Georgia Oakley’s BBC Film and BFI-backed drama Blue Jean as a lesbian basketball teacher in 1980s Newcastle, facing up to her own sexuality during a time when Section 28 — a law that prohibited the “promotion of homosexuality” by local authorities — was enacted.

While still at school, McEwen appeared in episodes of TV series Cranford and Waking The Dead but, at the time, wanted to be a teenager more than an actor. “I remember there was a party I missed because of filming, and I was so sad,” she says with a laugh.

Eventually, she went to the University of Leeds to study history of art but was unhappy. “By my third year, I thought, ‘What am I doing?’” Then she remembered the joy she found in acting. “I Googled ‘Leeds play auditions’ and found this whole realm of drama societies. I found my niche, as well as my happiness.”

She graduated from Bristol Old Vic Theatre School, secured her current agent, and changed her name from Rosy Byrne — McEwen is her mother’s maiden name. Her first job was The Cherry Orchard at the Bristol Old Vic, then Manchester Royal Exchange, before director Michael Boyd took her to the Royal Shakespeare Company. “Then I started auditioning for screen stuff.”

McEwen was a revelation as the villainous Libby in the second season of Netflix’s The Alienist. She followed it with Channel 4 thriller Close To Me and dystopian sci-fi Vesper, playing a clone robot opposite Eddie Marsan. As for Blue Jean, developed through the iFeatures scheme and cast by Bafta and multiple Bifa nominee Shaheen Baig, the part was written as a woman in her 40s, but “the emotions she was feeling I could understand. Jean’s got to put on a front wherever she goes, and that was so exciting to me.”

McEwen has just finished playing “a bitchy dancer” opposite Julia Garner in Relic director Natalie Erika James’ 1960s horror-thriller Apartment 7A and starts Othello at the National Theatre in October. “Eddie Marsan’s career is my dream,” she notes. “Where you’re doing amazing projects, always playing something that’s far away from yourself. I’ve never wanted to be famous. I want to be that actor that people [say], ‘She’s great,’ but no-one recognises you walking down the street.”