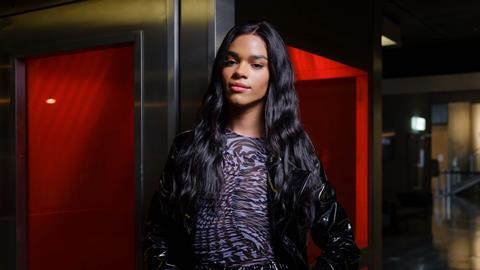 Manchester-born Yasmin Finney was still at sixth form college, studying performing arts acting, when she read on Instagram that Netflix series Heartstopper was seeking to cast a black trans teen girl in a prominent role.

In rapid succession she landed the part, and an agent, launching a career that has now seen her join the cast of iconic BBC sci-fi series Doctor Who, which she is currently shooting.

Sweet-natured queer teen drama Heartstopper — created and adapted by Alice Oseman from her own graphic novels, directed by Euros Lyn and produced by See-Saw — proved an instant hit in March with audiences and critics. It topped Netflix’s Trending TV chart, measuring social media engagement, for more than five weeks, and has been recommissioned for two more series.

“I completely fell in love with the story and the world Alice created,” says Finney, who ordered up the books after learning about the casting call. “I was like, ’This role was literally made for me.’” Like Elle, Finney switched schools after being bullied. “I’ve experienced pretty much everything a trans person could go through, the positives and negatives and all the in-betweens.”

The 18-year-old suffered a significant professional disappointment having landed the starring role in the Billy Porter-directed US feature Anything’s Possible, about a trans high-schooler navigating her senior year. The production scrambled to secure Finney a work visa, but fell foul of Covid-19 backlogs at London’s US embassy. “Of course, I was devastated,” admits Finney. “But whoever has got this opportunity now is going to do a splendid job. Hopefully there’s more things to come in the future.”

Growing up, Finney was able to take inspiration from trans actress Laverne Cox in Orange Is The New Black but, closer to home, “I didn’t see myself reflected in the UK TV and film industry, and I’m shocked right now to be here.” Now the actress is able to provide to others the UK role model that was missing from her own life. Since Heartstopper launched, “I’ve had so many people showing me their love. When people come up to me, it really does make what I do that much better, because I know that what I’m doing is inspiring someone out there.”