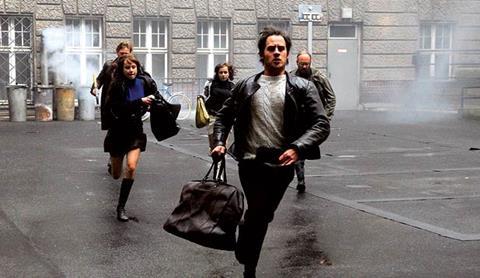 An extremely-ambitious undertaking which succeeds completely on a technical level, The Baader Meinhof Complex reunites Downfall’s producer-screenwriter Bernd Eichinger with his college friend and Christiane F and Last Exit to Brooklyn director Uli Edel. Looking very much like a further mining of the modern German political history seam which has compellingly produced both Downfall and The Lives of Others, The Baader Meinhof Complex is engrossing on many levels - except for, fatally, an emotional one.

Deftly relating the events that rocked Germany in the 1970s as the Baader Meinhof Gang - or the Red Army Faction - wielded its crazed mixture of ultra-left-wing ideology with vicious terrorism, The Baader Meinhof Complex will have an inbuilt audience of viewers who remember that vivid era, skewing male and upmarket. Younger crowds will take more convincing, but this fascinating lesson in recent European history will have no trouble attracting significant returns on that continent, led naturally by Germany. America will be very difficult for this lengthy, complex film, however, although an Oscar nomination (it has been submitted in this category) could help.

The RAF was born from the student protest movements of the 1960s when a highly-politicised post-war generation took to the streets, inspired by events in Vietnam and behind the ‘Iron curtain’. In West Germany, there was understandably a strong desire not to repeat the mistakes of the recent past and a distrust of the political establishment which included former Nazi Party members. The Baader Meinhof Gang started out as a loose group of ultra-left-wing student radicals making a noise: by the end, it was an almost-aimless professional terrorist group allied to the PLO and involved in cross-border extortion, kidnapping, murder and bombings. It did not officially cease to exist until 1998.

In electing to write this film Eichinger, working in close collaboration with Stefan Aust - a journalist at the time and author of the book on which this is based - set himself two major challenges. The first was to capture a wide-ranging series of events set over an entire decade with a large cast of characters who have very little screen time to establish themselves. This is so confidently tackled, Eichinger and Edel almost make it look easy. However, and this is a large caveat, every single person in this film, with the exception of a briefly-sketched police investigator (Ganz) is unsympathetic to the point of being revolting. Eichinger overcame this hurdle with Downfall; he can’t manage it here - there are too many of them, and they’re all creeps.

The Baader Meinhof Complex restricts itself to the events between bloody protests against the Shah in Berlin in 1967 and the ‘German autumn’ a decade later - the Lufthansa hijacking and the kidnapping of German industrialist Hanns Martin Schleyer. The film would seem to have at its centre the character of Ulrike Meinhof (Gedeck), the left-wing journalist-turned-terrorist. But as Gedeck plays one of the world’s most notoriously evil women as a depressed, mumbling drone, attention falls instead to the more traditionally-psychopathic Andreas Baader (Bleibtreu) and his hardline girlfriend Gudrun Ensslin (Wokalek). They get little screentime, though, in the face of so many RAF members, bombings, bank heists, murders, and even a bout of guerrilla training in Palestine (the RAF and the PLO were closely linked: when the PLO stormed the 1972 Munich Olympics, one of its demands was the release of Baader and Meinhof)..

The production prides itself on being historically accurate, down to using transcripts of the Gang’s Stammheim prison trials and even the number of bullets used in its gruesome assassinations. This is a controversial subject in Germany, and Edel is at pains to be dispassionate. Dramatically, though, The Baader Meinhof Complex will hold very little suspense for people who lived through these times: the resolution of the German autumn was as memorable in its day as the War on Terror is now. For today’s younger, politically-aware demographic (not as high now as it was then), this is a fascinating look at the birth of modern terrorism. The RAF itself may seem dated with its Marxist, Maoist rants, but as the production is at pains to point out, it does have resonance with what is happening now.

Technically, this is shot up-close and personal; Edel makes heavy use of handheld, but it’s not jarring. Production values are excellent - at Euros 20m, this is reportedly Germany’s most expensive film ever. Score is minimal, although opening the film with Janis Joplin (Mercedes Benz) and closing it with Bob Dylan (Blowin’ In The Wind) seems at odds with the spirit of what unfolds onscreen, even if the timing is roughly right. In opting to shoot the film in quasi-documentary style - moving efficiently but crisply from one event to another - Edel keeps the viewer at a distance from the people onscreen and emotionally The Bader Meinhof Complex flatlines, even as it fascinates.