‘The Cave’ director: “For a woman to be filmed is dangerous”

In an underground hospital in a besieged Syrian city, Dr Amani saved lives while battling prejudice and patriarchy. The Cave director Feras Fayyad tells Screen why the story is so important. 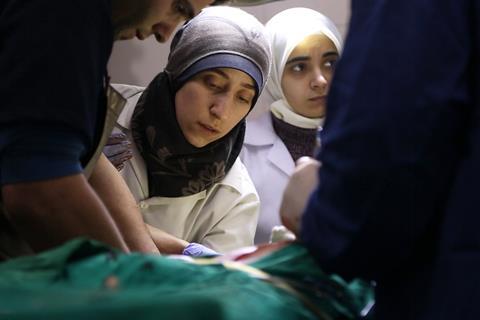 It is no accident the protagonist of The Cave is a woman. Director Feras Fayyad grew up around strong women: his mother, seven sisters and four aunts. He saw the prejudice they faced in conservative Syrian society. “I have a sister who is a nurse, a sister who is a teacher, a sister who is a journalist,” the director says. “All of them can be fired because they are women and I can’t do anything for them. So I wanted to tell the story of my sisters and my mother through Dr Amani.”

Dr Amani Ballour is a 30-year-old paediatrician who quit her postgraduate studies in Damascus to help the citizens of Ghouta during the city’s siege. She became the first female doctor in the history of Syria to run a hospital — not a gleaming building but a series of underground tunnels nicknamed The Cave.

Syria-born Fayyad — educated in Paris, once imprisoned in Syria and now living in Copenhagen — had already heard about Dr Amani’s work in 2013, before he made his 2017 Oscar-nominated documentary Last Men In Aleppo, the story of volunteer rescue workers.

Even though appearing on camera made her life and work more dangerous, Fayyad finally convinced Dr Amani to be filmed. “Letting the camera in was one of the bravest things she did,” he says. “For a woman to be filmed is extremely dangerous. The camera helped her speak out, [and also] to realise how important the work is that she is doing.”

Because of the siege in Ghouta, Fayyad could not go to the city himself, and was working elsewhere in Syria (and later Copenhagen). He took the unusual step of hiring cinema­tographers remotely, recruiting Damascus-born DoPs Muhammed Khair Al Shami, Ammar Sulaiman and Mohammed Eyad, all more experienced with news photography. “It wasn’t easy, they were not used to this kind of filming,” Fayyad explains. “They weren’t used to the cinema verité style.”

The trio would share footage with Fayyad via the internet or flash drives, amassing more than 500 hours of footage.

Shooting underground in claustrophobic spaces, sometimes with only the light from a mobile phone, had its challenges. Fayyad wanted to use that to artistic effect: “We used the composition of light and darkness, using light as a psychological tool.” That footage shows the brutal reality of working in The Cave, where Dr Amani and her colleagues Samaher and Dr Alaa use classical music to take the place of anaesthesia, where there is not always enough food to feed patients and staff, and where children die from a chemical attack.

He hopes The Cave paints an honest portrait of what ordinary people experienced during the siege. “There was a wall between people receiving the news about Syria and what really happened in that country,” says Fayyad. “I felt a responsibility of showing that. People need to see it.

“There were so many layers,” he adds. “There was of course this brutal war and a woman trying to get on with the work she wanted to do. She is challenging herself and saving lives.”

Fayyad knew he had not created an easy watch, which is why winning Toronto International Film Festival’s people’s choice award for documentary was even more meaningful.

“It was way beyond my expectation because I’ve made a hard film in an underground hospital, wanting people to feel this closed space,” the director explains. “And I didn’t know if the audience would identify with Dr Amani. This is not a classic cinematic female character, the stereotype of mother or wife. But after the Toronto screening, people were stopping me in the street talking about their emotions. Women especially really identified with her.”