A new joint-venture scheme from the BFI aims to drive up investment in UK independent films by helping producers and distributors to share the risks and rewards of distribution. 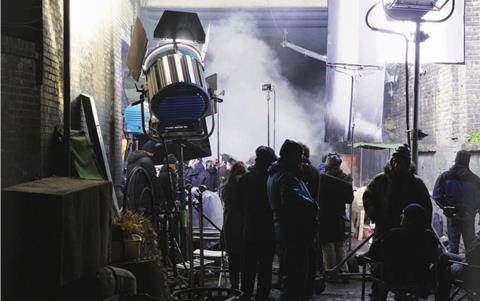 In a challenging UK market, producers and distributors should share more risk and reward. That is the idea behind the British Film Institute’s new joint-venture scheme.

The BFI is rolling out the initiative - which will see BFI-backed UK producers split minimum guarantees and revenues with UK distributors - to stimulate investment in UK independent films.

“UK distribution has been in a difficult place in the last few years,” BFI Film Fund director Ben Roberts says. “There haven’t been as many distributors coming on board more challenging films in the early stages, but this could help.

“If this provides a comfort for distributors to invest in some of those riskier projects that we’re investing in, then that can only be a good thing,” he continues.

The BFI will initially launch a six-project pilot test of the optional scheme in order to gauge interest and viability.

Under the terms of the new agreement, a producer would invest part of a Lottery production award from the Film Fund as its contribution of up to 50% of the UK distribution minimum guarantee (MG) for the film in question.

In return for sharing the distribution risk, the distributor would allow a 50% share (providing producer investment had been 50%) of its net revenues to be held in a Locked Box by the BFI for reinvestment by the producer in their future productions.

From the date distributor’s gross receipts are first received and throughout the recoupment period a ‘distributor base fee’ of 15% will be kept by the distributor as a contribution towards its overhead for distributing the film.

Once all distribution costs and both MG contributions have been recouped, the fee will cease to be payable.  From that point on the full fee specified in the relevant distribution agreement will be shared between the distributor and the producer on an ongoing 50/50 basis (or other agreed percentage) with any ongoing costs deducted ‘off the top’ first.

Sales companies who make the UK sale are not expected to take a commission on the producer’s lottery MG portion.

“For a distributor, this aligns our [distributors’ and producers’] imperatives,” says Alex Hamilton, managing director, eOne UK, and Independent Film Distributors’ Association (IFDA) chair. “Sometimes you want producers to be more focused on the outcome of the film and less on asking us to spend more money.

“This is another way for UK distributors to be able to look at and consider UK films,” he continues. “In the marketplace British films often aren’t as competitive as their US counterparts. At times, we’ve preferred to pick up US films because they are less risky - for example, the p&a can be the same for both UK and US films if you’re going to push them out wide.”  According to BFI executives, the initiative has the support of producers’ trade association Pact and broad support from members of IFDA.

Studios have not been part of the discussions and Screen understands that at least one or two larger UK indie distributors have expressed reservations about the scheme’s fee structure.

“If a film performs, the upside for producers out of this is very advantageous,” says producer and Pact film policy group chair Marc Samuelson. “We’ve all been in situations where we’ve had films that have worked and yet we can’t understand why there isn’t any overage coming through. This would mitigate that very significantly.

“This isn’t money to go to the beach with,” he adds. “This is for reinvestment in film. It’s an incredibly useful pot of cash that can potentially transform the nature of a production company.”  The scheme could also see producers benefit from certain distributors’ SVoD deals: “Producers may well benefit from good SVoD deals and if they did a deal with a studio, in theory, they could benefit from that distributor’s Sky deal,” Hamilton says.

Discussions are still ongoing at press time between Pact, Directors UK and the Writers’ Guild of Great Britain about the minimum shares of recouped revenues for directors and writers. However, Directors UK and Samuelson both told Screen that an agreement is imminent.

The JV scheme was first proposed two years ago in Lord Chris Smith’s Film Policy Review as a way to incentivise collaboration between distributors and producers. BFI executives pointed to the complexity of negotiations and the large number of recommendations in the Film Policy Review as reasons for the two-year period between the initial proposal and implementation.

Moving in the right direction

The ambition behind the scheme, which is still subject to EC state aid approval, is to produce more financially viable UK films, develop stronger production companies and increase industry collaboration.

In particular, the scheme is aimed at supporting films that have the majority of their pre-sale value outside the UK, and those smaller, more niche films that might struggle to attract a mainstream distributor.

The UK remains a challenging distribution space with both the number of releases and costs rising while the value of new and existing ancillary rights remain uncertain.

While the initiative is by no means an instant industry-wide game-changer, many acknowledge that it is a significant nudge in a better direction that could potentially be transformative for some businesses.

“I think this stands a good chance of working but we won’t really know for a couple of years,” notes Samuelson.

What can the new BFI scheme achieve?

“This is for reinvestment in film. It’s an incredibly useful pot of cash that can potentially transform the nature of a production company.”
Marc Samuelson, producer

“If this initiative provides a comfort for distributors to invest in some of those riskier projects that we’re investing in, then that can only be a good thing.”
Ben Roberts, BFI

“This is another way for UK distributors to be able to look at and consider UK films. British films often aren’t as competitive as their US counterparts.”
Alex Hamilton, eOne UK