Vitaly Mansky says he wanted to show the human side of a Soviet leader in ‘Gorbachev. Heaven’ 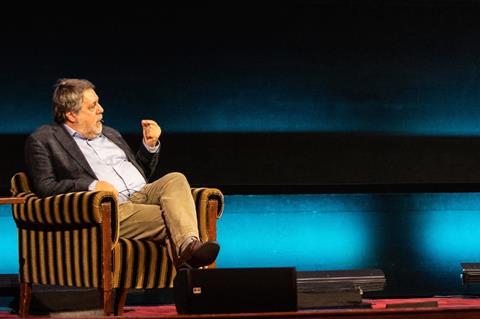 Vitaly Mansky is one of the very few international guests to have made it to Amsterdam for IDFA. “I was one of only seven guests at the beginning of the festival whereas in previous years there were 3,500 guests!” he says of the toll the pandemic has taken on international travel.

The Russian director was in town for the world premiere of Gorbachev. Heaven, sold by Deckert Distribution. The intimate, poetic and revealing documentary explores the world of Mikhail Gorbachev, the last leader of the Soviet Union.

Mansky has known Gorbachev for more than 20 years. They have a friendly relationship. Some may be startled by the spiky nature of the questions that Mansky lobs at the ex-Soviet leader. Even Werner Herzog’s Meeting Gorbachev (2019) took a more softly, softly approach. However, Mansky has a strong enough rapport with his subject to touch on the rawest, most contentious subjects.

One of the main goals of the documentary, Mansky says, is to show Gorbachev, now in his late 80s and with failing health, in the most human light possible. He swears and drinks, but that makes him all the more sympathetic. There is a frankness and decency about him that you simply won’t find in Vladimir Putin, subject of the director’s previous 2018 film, Putin’s Witnesses. Mansky’s avoidance of talking heads experts and archive gives audiences the sense that they’re having their own, unplugged and unmediated audience with one of the most influential figures in late 20th century history.

Mansky is now back in Riga in Latvia where he has lived since 2014. He spoke to Screen via Skype and through interpreter Galina Stepanova from Hypermarket Films.

How easy was it to persuade Gorbachev to take part in the film?
It took quite some time, actually, to persuade him despite the fact that we were on very friendly terms. He was happy to have conversations with us, but felt that his general state of health didn’t really allow him to be hero of a documentary right now - which is why it took so long to convince him.

The film has a very poetic style. There are a lot of cut-away to images of Gorbachev’s adored wife Raisa, who died in 1999. What was the thinking there?
Initially, our intention was to make a film just inside his house, never to leave its confines, and to make an even more poetic, minimalistic, and, in a way, romantic picture image of the solitude of him in his old age. However, the circumstances of reality and his life changed. Gorbachev had to move permanently to the hospital. He wasn’t able to return to his home so we started to film him in his office. This disturbed the plans of our film.

What most surprised you about how Gorbachev behaved or what he told you?
He wasn’t embarrassed to remain himself in the film. He wasn’t embarrassed to show his physical condition even when his assistants would sometimes try to intervene to prevent the film showing him as he is. This is a rare quality for people of such stature who are usually keen to protect their own image. Also, he doesn’t try to be politically correct. It is not thought of very well to say that Lenin is our god, neither in world politics nor in Russian politics. The fact that he was prepared to say that himself is quite telling about his personality. 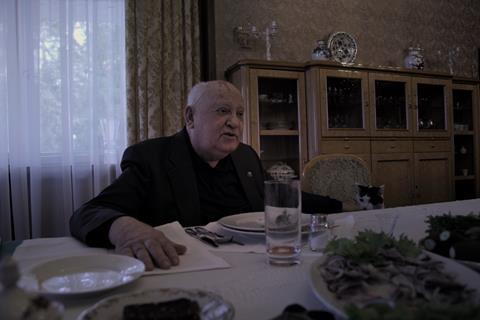 Do you see him as a romantic? He quotes poetry and sings old folk songs.
I don’t want to hide the fact that when I depict such a romantic character who is in love with life and also in love with a woman, I am comparing him to those who came to power after him. I want to underline this shocking contrast with the person who is in power [in Russia] today.

Do you see the film as a companion piece to Putin’s Witnesses? You include many images of Putin on TV in the background.
We wanted the TV images to reflect the contemporary state of affairs. On the first day of shooting, Putin was on TV for four or five hours, connecting with the people. We filmed that in the background. During the New Year, it was the president’s address so that was natural and organic to the film. I agree that there are a lot of images of Putin in the film. It was important to have a lot of him because I wanted every second to feel like a contrast between what we lost and what we have now.

What did you think of the Werner Herzog documentary about Gorbachev?
I wanted my film about Gorbachev to be about him as a human being, not just as a political figure. Maybe I would allow myself to suppose that Werner Herzog’s film can be shown in schools, in history lessons, whereas my film, it can also be shown in literature lessons and maybe in lessons about spirituality.

Why was it important to show the modest circumstances in which he lives?
I know he is in a relatively difficult financial situation. I wanted to emphasise that for the sake of viewers who sometimes think he is living a wealthy life in Germany having betrayed the USSR, which is not the case. I also know that during Yeltsin’s time, he was receiving a pension that was the equivalent of $5 a month.

I was very struck by what your film revealed about what happened to both Gorbachev and Raisa’s ancestors during the Stalin era. Does every Russian family have a similar history?
I think that the majority of [Russian] people have ancestors who were either victims or executioners. The state did everything to delete this memory and people did everything they could to forget about it. Gorbachev was one of the first people who brought history back into contemporary life.