Why some Hong Kong documentary filmmakers are staying anonymous for safety 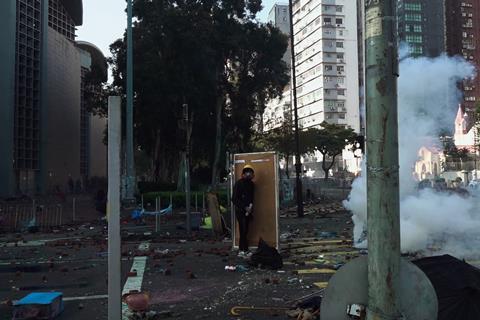 Inside The Red Brick Wall

The hottest director’s name on people’s lips at IDFA this year could be… “anonymous”.

IDFA is screening two documentary features – Inside The Red Brick Wall and Taking Back the Legislature – that have their directors listed only as “Hong Kong Documentary Filmmakers.” if named, they could be at risk of arrest due to the Chinese government’s controversial National Security Law, which came into effect on July 1.

The filmmakers behind the two films agreed to answer Screen’s questions via anonymous email. “Everyone has to stay silence in fear of the ambiguous National Security Law, or the government’s use of different laws (e.g. money laundering) to prosecute people saying things they don’t like,” they say.

The group of individual documentary filmmakers came together in June 2019 to work in solidarity.

“The Fight For Freedom Movement in Hong Kong started with a few organised protests in June 2019 in response to the government’s attempt to pass an Extradition Law Amendment Bill. Yet with the violent crackdowns from the police and the lack of thoughtful response from the government, it soon became weekly guerrilla-style battles between the protestors and the police for months,” the filmmakers explain..

“With so much happening over large areas and across districts, we agreed to form an archive so that if any of us decide to put together a story, we would share our footage to give the story more content and angles.”

These two features came together in different time frames. “We had the urge to produce Taking Back The Legislature as soon as the incident was over [in July 2019], because so many Hong Kong people could not understand the protestors’ decision to try to occupy LegCo [The Legislative Council Complex], and there were lots of rumours going around saying those pushing in at the front were undercovers from the cops/Chinese Communist Party.”

They continue, “As for Inside the Red Brick Wall, the PolyU [Polytechnic University] siege is a deep scar for those who were trapped inside, but also for those who experienced it outside. It was a traumatic experience and it felt like a huge defeat for everyone in support of the Movement, yet many lack basic understanding of how it really happened. We hope to restore the truth. There are always many sides to the truth, and we hope to restore a missing piece in the society’s narrative about what happened.”

IDFA is not the first case for this situation of filmmakers having to stay anonymous in 2020. At Venice, the documentary 76 Days, shot in Chinese hospitals during the Covid outbreak, was credited to one anonymous director alongside Hao Wu and Weixi Chen.

For Inside The Red Brick Wall and Taking Back The Legislature, the group also stays anonymous to protect their subjects – for instance, protestors captured on camera (whose faces are pixelated in the finished films). The films’ producer, who also wishes to stay anonymous, tells Screen, “Our priority is to protect the filmmaking team as well as any subjects who wish to stay anonymous.”

Staying anonymous also reflects the collective spirit of the group of documentarians. “There is no leader and everyone is faceless. Our work does not only belong to us but to the people of Hong Kong,” they say. “We also believe staying low profile allows us to continue doing what we do with the highest agility, whether that is to prevent being man-marked by police at the scenes, or having to face unfair prosecutions from the government.”

It is still disappointing the filmmakers will not get credit for their work. As the producer says, “Inside The Red Brick Wall is selected for IDFA Competition and it’s sad to see that my directors cannot benefit from the film’s festival success because their names can’t be disclosed.”

The filmmakers see a larger goal: “Signing our name to our work is not a priority to us. Yet the attention we have received from both the local and international communities has been very encouraging. It shows us that there is value in what we do and it reminds us to keep producing.”

The producer hopes the National Security Law won’t silence these important voices of independent non-fiction work. “Hong Kong filmmakers have to be brave yet think ahead and be cautious.”

A director’s existing reputation or role as an exciting new talent can be a great selling point so staying anonymous could hurt the films’ chances to reach audiences.

Karin Chien, the founder of dGenerate Films, which is a distribution label under Icarus Films, has a long history of releasing Chinese films in the US. She hopes to distribute films from anonymous directors, and also plans to release a different Hong Kong film at IDFA, Lost Course. That director, Jill Li, can be named, but the publicity situation around the film is still tricky.

Chien is mindful to always take advice from the filmmakers, whether named or anonymous. “We listen closely to their wishes. We may seek their approval before undertaking screenings. We will tailor the film’s promotion in close consultation with them. For example, we arranged for the director of our latest acquisition to deliver a keynote address at the largest documentary conference in the US, to coincide with the film’s release, but the conference agreed not to post her speech to their YouTube channel.”

She adds, “Conversely, for another director who lives under surveillance, we heavily moderate his publicity, but we allow his films to be discovered by audiences on YouTube.”

Publicity around anonymous filmmakers or banned films shouldn’t resort to headline-grabbing tactics, she cautions. “We try hard to avoid the ‘banned in China’ label because it eclipses the film itself. These films are on the forefront of the evolution of cinema, aesthetically and politically.”

Sometimes Chien even has to cancel publicity – a strange situation for any distributor. “We have had to put the brakes on a film’s publicity. In that case, I’ve consulted with publicists on how to discourage journalists from writing about a film…We’ve learned that volume of press can be a risk factor. So, we might focus on just one well placed piece.”