Willem Dafoe on playing van Gogh in 'At Eternity's Gate', and why working in TV "can make you lazy"

The actor talks to Screen about being taught how to paint by director Julian Schnabel, the power of film and art, and why working in television can make an actor “paunchy”. 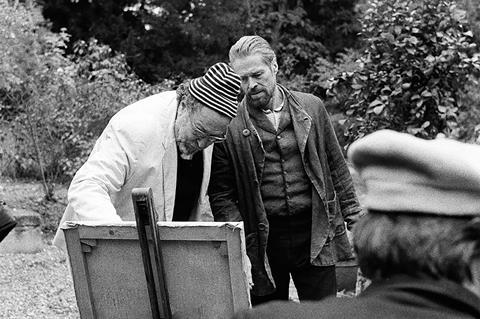 When Willem Dafoe took on the role of troubled 19th century post-Impressionist artist Vincent van Gogh in At Eternity’s Gate — a role that won him the Coppa Volpi at Venice Film Festival this year — he could not have foreseen how it would transform the way he saw the entire world.

“When I started this process I thought I knew a lot about van Gogh, but in fact I didn’t,” the actor explains. Armed with a screenplay by Jean-Claude Carriere — whose credits include The Unbearable Lightness Of Being — and Louise Kugelberg, Dafoe immersed himself in biographies and the artist’s letters. But most significantly, he also learned to paint under the tutelage of Julian Schnabel, the film’s director.

The process taught him a new way of seeing colour and light. Schnabel’s advice was to “just make marks, paint the light”, Dafoe says. “When you’re painting a cypress tree, you always rush to paint the tree, but as I look out the window, I’m not seeing a tree, I’m seeing a swirl of colours. I’m seeing the lights and the darks, and I’m seeing that black line. I don’t see it as a branch — I see it as colour, as pure form. When you enter into that way of seeing, psychologically you’re transformed.”

At Eternity’s Gate portrays the final years of van Gogh’s life, a period leading up to his death in 1890 that encompasses plenty of painting, a friendship with artist Paul Gauguin, a self-inflicted severing of van Gogh’s ear and a stay at an asylum.

The film shot in late 2017 at the French locales where van Gogh spent the last two years of his life: Arles, the asylum in Saint-Rémy and Auvers-sur-Oise. Produced by Jon Kilik, it was financed by Riverstone, SPK Pictures, foreign equity and private investors. It premiered at Venice Film Festival, and CBS Films is releasing in the US on November 16. Rocket Science has international sales.

Upcoming releases for Dafoe are roles in Aquaman, Edward Norton’s latest directing effort Motherless Brooklyn, Robert Eggers’ The Witch follow-up The Lighthouse and Disney’s live-action Togo. “I look for opportunities to have experiences that are out of my experience,” says Dafoe. “I want to be transformed.”

How did Julian Schnabel prepare you for this role?

He walked me through as we were painting, teaching me how to look at things. That really became the key to how to inhabit that character. We painted all the time. Whenever we had a moment, we’d go out in nature. We’d often work alone. We’d paint outside, [and] we’d paint inside.

How did you work together?

I know him and I’ve been around him in the studio. He’s painted me. There was a terrific trust there and he gave me the opportunity to do these wonderful things. Sometimes I felt he wanted to be painting, but practically speaking we made a conscious choice that although he painted some of the paintings in the set dressing, in the actual scenes he was very clear that I had to be the painter. So I became kind of an extension of [Schnabel], which is a great position to be in because that really frees you.

You become engaged in the action in a way that you really can be transformed. As van Gogh would have said, you’re not thinking; you’re doing. It’s beyond thinking. It’s beyond dualistic thinking — it’s in the sweet spot of some sort of union with something.

What did you learn about van Gogh that surprised you?

In the early period when he painted The Potato Eaters — that period I didn’t know about. His devotion and his desire to serve was something I didn’t know about. In his letters, over and over he was really haunted by his identity of being useful, being productive and being good at what he does, which was at odds with his vision and his awkwardness personally and socially with people.

There’s a scene in the film where van Gogh is painting outdoors and he is very disturbed when he is interrupted by a group of schoolchildren. It shows the troubled side of the artist that we have all heard about.

He had various… let’s call them social problems. When we were in Arles, there was a document that the people in town [drew up] that basically proposed that he be expelled from the town. That is a factual thing. It’s referred to in the movie. He was not a particularly desirable character in that community.

As Loving Vincent did last year, your film veers away from the understanding that van Gogh committed suicide. Why was this?

There’s been new information… it’s not certain that he committed suicide, and there’s evidence of other scenarios. [With regard to the suicide theory] where did he get a gun? He had no way really to get a gun. If he wanted to kill himself, why did he shoot himself in the stomach, so far away from town, and walk into town and suffer for 30 hours before he died? Everybody thinks they know the story but nobody really knows the story.

Your career has been so varied over the years. What do you look for when you choose a new role?

It’s not just about material, it’s also about people and situations. That’s very important. If you look at my filmography, it’s pretty director-driven. I want to learn something, because when you learn something you have a shift of understanding or a shift in consciousness and it opens you up to seeing in new ways. Above all that’s what film and art can do — it can open our eyes, it can keep us awake, and that’s what I’m always looking for — to stay awake. Too much conspires against us to make us sleep in real life.

Are you planning on working in television, like many of your peers?

I’m not really interested. I like the adventure of being an explorer, going out somewhere, making something and then coming back with the experience. The lines between TV and film are so blurred now. I respond to a director, not a showrunner. The idea of having a director come in every two segments doesn’t make sense to me. When you do a performance over a long time you can develop a relationship slowly with the audience, and as an actor it can make you paunchy.

It can make you lazy because you get a lot of time to charm your way into their hearts and become part of their family. When you’re making a movie, it’s much nervier and much more dangerous because you can’t calculate it so much. It has to be more a leap of faith… Believe me, it’s not a put-down of people that work in television. There’s a lot of great television.

Do you watch television?

No. When I have time I watch movies or I read. I understand a lot of television can be very good but you make your choices with your time.