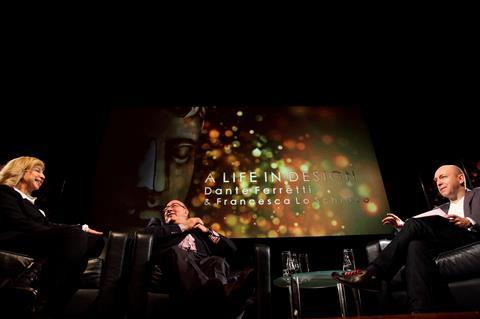 Such is the depth — and weight — of production designer Dante Ferretti’s CV, a full day at BAFTA wouldn’t have been long enough. Instead the packed house for his afternoon masterclass received tantalising extracts from a life spent setting the stages, from his days as an assistant to Pier Paolo Pasolini to six films with Fellini and on to an enduring collaboration with Martin Scorsese and beyond (Baron Munchausen, Interview with a Vampire, the Name of the Rose - any one of these films would be the crowning glory of another art director’s career). Appearing with his wife and frequent collaborator, the set decorator Francesca Lo Sciavo - they met on the set of La pelle in 1981 - Ferretti barely scratched the surface of 42-odd years as a production designer (on Fellini’s Medea in 1969, although he had been an assistant for five years by then, starting on Pasolini’s The Gospel According to St Matthew).

After his session, the 2010 documentary Dante Ferretti: Production Designer filled in some of the gaps, but the crowd was left crying out for more. One subject he didn’t touch on? Hugo Cabret, his anticipated upcoming collaboration with Martin Scorsese, a family film in 3D - and Ferretti’s first time to work in that medium.