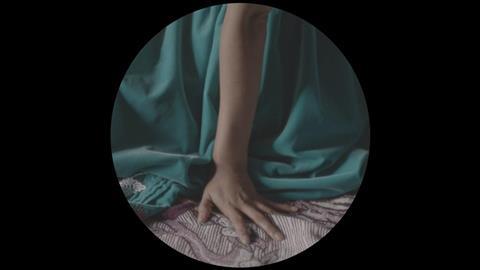 Set in a Mexican village at the base of a volcano, Lucifer is the third instalment in Van den Berghe’s triptych about the emergence of human consciousness after Little Baby Jesus of Flandr and Blue Bird, previously shown in Wroclaw in 2012.

Lucifer received its world premiere at the Rome Film Festival last October and won the Grand Prix at the Black Nights Film Festival in Estonia’s Tallinn in November.

Lebanese filmmaker Akram Zaatari’s Twenty Eight Nights and a Poem was named Best Film by the jury of the Films on Art International Competition, while a Special Mention was made of Crystal Moselle’s The Wolfpack.

The First Prize in the Polish Short Films Competition went to LOVE, LOVE by Grzegorz Zariczny who is currently working on his feature debt Waves for the Munk Studio.

Footage from the story about two trainee hairstylists in Krakow’s Nowa Huta wanting to make something out of their lives was shown during the Polish Days’ Work in Progress showcase.

In addition, Agnieszka Zwiefka’s The Queen of Silence - one of the winners in the International Competition at June’s Krakow International Documentary Film Festival - was awarded the first prize in the Zoom Competition for visual artists and filmmakers hailing from Wroclaw and Lower Silesia.

New Horizons jury member Noaz Deshe is one of six international filmmakers selected by the German regional fund Medienboard Berlin-Brandenburg with its partners to be an artist in residence this summer.

The Berlin-based artist and filmmaker, whose White Shadow won Wroclaw’s Grand Prix and Audience Award last year, will be spending three months in Paris as part of the Berlin 24/7 programme, while Cyril Tuschi, the director of a documentary about Mikhail Khodorkovsky, will travel to Hong Kong for two months and Oh Boy’s Jan-Ole Gerster will spend time in Mexico’s Guanajuato as part of a cooperation with the city’s film festival to work on a new film project.

The residencies in Berlin are being taken up by the French director-illustrator Céline Devaux who will use her stay to work on a new animation project; the Mexican director-writer-producer Max Zunino who is working on a new screenplay; and the Hong Kong director Susi Au who is developing an episodic film about eight Chinese women in dancing clubs around the globe.

The three artists in residence in Berlin will receive expert advice and support during the stay from the staff of the Nipkow Programm.

Short films from Latvia, Estonia and Scandinavia are being lined up for screening at the cinema launched by the Lithuanian Film Centre (LFC) at Vilnius Airport at the end of May.

Speaking to ScreenDaily in Wroclaw, Liana Ruokytė-Jonsson Head of Film Promotion, Information and Heritage, said that she had an overwhelmingly positive reaction from the film institutes of other European countries about the idea of presenting shorts at the 50-seater cinema.

“The idea is to have a guest country each month, beginning with Latvian shorts in October,” she explained.

This will be followed in November by the best of European shorts from Eurochannel (who has a Lithuanian focus in its schedules during the same month) and in December by shorts from Estonia, with the Scandinavian national film institutes contributing programmes of shorts from the beginning of 2016.

“The first screenings start around 4 o’clock and the final programme is around midnight when the last plane leaves. There are no commercials although we can show trailers of forthcoming releases of Lithuanian films. Everything is free and the films are shown with English subtitles,”  Ruokytė-Jonsson added.

“It’s really interesting that even those people who never go to the cinema are now visiting our cinema at the airport – some visitors are even coming to the airport extra early to check in so that they come and see the films. And the programme has also been a hit with the airport staff who come by when they have their lunch breaks.”

Ruokytė-Jonsson was in Wroclaw last week with LFC director Rolandas Kvietkauskas to present a showcase of Lithuanian cinema at New Horizons, including films by Kristijonas Vildžiūnas (Back To Your Arms), Raimundas Banionis (Children From the Hotel America) Valdas Navasaitis (The Courtyard), Ignas Jonynas (The Gambler), and Mykolas Vildžiūnas (Non-Present Time).

The LFC had already been in Krakow at the beginning of June with a showcase of Lithuanian documentaries and will also be present at the Gdynia Film Festival in September where it is organising a meeting between Lithuanian and Polish producers to explore the opportunities for more co-productions between the two countries.