Hong Kong Filmart has evolved in line with Asia’s flourishing film businesses to become an event that is much more than buying and selling. Liz Shackleton reports. 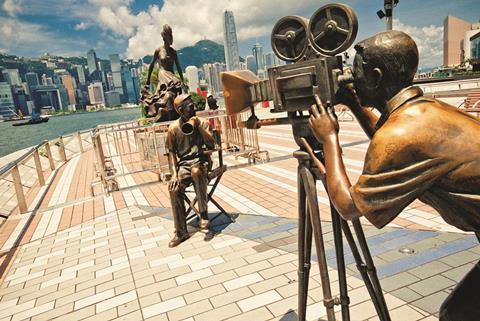 When Filmart held its first edition in 1997, Asia and its various film markets was a very different world to the one we know today. China’s box office was less than $100m annually; the multiplex boom across Southeast Asia was still in its infancy and South Korea had yet to have its first major local hits such as Shiri and Joint Security Area.

Fast forward 20 years and Asia is home to a multitude of dynamic film markets and production industries, including mainland China, which is on course to overtake North America in terms of box office in the next few years. Filmart, organised by the Hong Kong Trade Development Council (HKTDC), has grown up alongside this remarkable progress and become the region’s biggest industry platform.

At this year’s edition, some 800 exhibitors and 7,200 visitors are expected from around 35 countries and regions. New exhibitors and pavilions include the Arab Cinema Centre, Dubai Film and TV Commission, Spanish producers’ association FAPAE, the Macau government and PactUS.

For several years Filmart was regarded as more of a networking event than a place to close deals — a conveniently timed stopover to wrap up Berlin talks and start work on Cannes, with the added benefit of being able to meet the smaller Asian buyers that do not attend the big western markets. But this perception appears to be changing as Asian markets mature and the event becomes more established.

“Filmart has shifted from a networking event to a deal-making platform,” says Kevin Adege, senior manager of sales at London and Los Angeles-based Content Media. “Films like Dan Bush’s The Vault and Caradog James’ Don’t Knock Twice have found distribution at Filmart. It has become a strong event for genre films but also extends to the action films and thrillers that Southeast Asia is hungry for.”

European sales agents agree real business is now being done in Hong Kong. “Two years ago we closed our entire line-up with Taiwan for VoD and some theatrical,” says Yuanyuan Sui, head of sales and operations for Berlin-based Picture Tree International, which is attending under the European Film Promotion umbrella.

“Distributors come and go in some territories so it’s good to visit Asia and stay on top of what’s happening. It’s also a chance to meet the decision makers who often don’t speak English, or come to Berlin, AFM or Cannes.”

The irony for sales agents attending Filmart is that mainland China, by far the biggest market in the region, is still pretty much a closed shop for theatrical sales. Since the quota for revenue-sharing films was expanded to 34 titles, nearly all taken by Hollywood blockbusters, the space for smaller indie films imported on a flat-fee basis has shrunk.

Sellers describe all-rights deals as “practically impossible”, except for big-budget English-language action titles. This leaves sales to a limited number of TV outlets and China’s online video platforms, which are plentiful but not paying big bucks for indie films.

However, sales agents say China’s VoD sector is becoming ever more organised and professional. “VoD business is getting better because we now have people we can trust to pay and get the films out there,” says Nicholas Kaiser, sales and acquisition executive for France’s Memento Films International. “We also understand the market better so the process is not too confusing.”

Jonathan Wolf, executive vice-president of Independent Film & TV Alliance, which has organised a pavilion at Filmart since 2011, points out the market is a pan-Asian rather than Chinese event: “It’s important to note that Filmart is not just about China. With heavy representation from countries throughout the region, Filmart has become the perfect venue to connect with all of Asia.”

Sellers back this up, saying that South Korea, Hong Kong, Taiwan, Singapore and Malaysia are all active buyers, and often acquire theatrical rights.

“We’ve also done a few deals with Japan, but it’s a difficult market unless you’ve got a film that’s been at Cannes or the Oscars,” says Picture Tree’s Sui.

But as Filmart is not as intense as the big three international film markets, it’s also a good place to focus on activities other than buying and selling. Increasingly, companies attend the market looking for co-production and financing opportunities, with the Hong Kong-Asia Film Financing Forum (HAF) offering a convenient platform to network with film-makers and financiers (see box). Filmart also offers a chance for delegates to catch up on market developments.

“You’re not signing lots of deals every day so you have time to refresh your knowledge of the region,” says Kaiser.

HKTDC senior service promotion manager Peggie Liu says one of Filmart’s major aims is to expand the conference programme: “In addition to being a marketplace, we want to build out Filmart as a knowledge platform. The region is changing rapidly so we want people to leave feeling they’ve learnt something to make this a must-attend event.”

Conferences at this year’s Filmart include a panel on moving from local to international production hosted by Screen International; a discussion on ‘Building a Blockbuster Franchise’, hosted by the Producers Guild of America; a digital entertainment conference, with speakers from China’s Base FX and Japan’s Dot By Dot; and an animation conference hosted by Annecy International Animated Film Festival.

Beyond the market floor in the Hong Kong Convention and Exhibition Centre (HKCEC), Filmart is also an ideal venue for dinners, social events and networking. HKTDC hosts several events inside the HKCEC and this year is planning an opening night cocktail party to celebrate Filmart’s 20th edition.

However, some of the best networking takes place in adjacent hotels, bars and restaurants, as Filmart is conveniently located in some of the buzziest districts of Hong Kong.

A host of promising features line up for the upcoming edition of HAF, while new cash prizes are on offer to this year’s film-makers

In addition to Adam Wong’s Trains In The Night, four other Hong Kong projects have been selected for HAF: Amos Why’s Napping Kid, based on an award-winning novel; Kenneth Lai and Paul Sze’s Hypnotise The Jury; Anthony Yan and Hang Chiu’s Vampire Diary; and The Lady Improper from Jessey Tsang, who won best new director at the Hong Kong Film Awards in 2012.

HAF will also present five documentaries, including Wang Bing’s Border Bride, produced by Isabelle Glachant, and Nik Voigt and Mariam Chachia’s Abastumani, which is the first HAF project from Georgia.