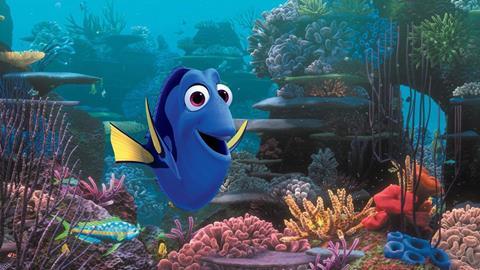 Finding Dory, featuring a voice cast led by Ellen DeGeneres, opened higher than any other animated film, beating the previous mark set by Shrek The Third in 2007 on $121.6m. However it did not win in real terms, as the latter’s opening gross adjusts for inflation to $140.9m.

The Finding Nemo sequel also scored the biggest ever debut for animation hit factory Pixar and overtook Toy Story 3, which opened in 2010 in June $110.3m, which adjusts for inflation to $121.5m.

This was only the second time in Pixar’s 20th year of releasing features that one of its films has debuted to more than $100m in North America. Dory’s predecessor Finding Nemo arrived in May 2003 on $70.3m, which adjusts to $91.8m in real terms. That film finished on $339.7m.

Legendary-Universal’s Warcraft tumbled a huge 70% in its second weekend and fell three places to number five on $7.2m for a lowly $38.4m.

The film stands at $205m in China after slowing down considerably in its second week there, and has grossed $339m internationally overall, brining the early global tally to $371.6m.