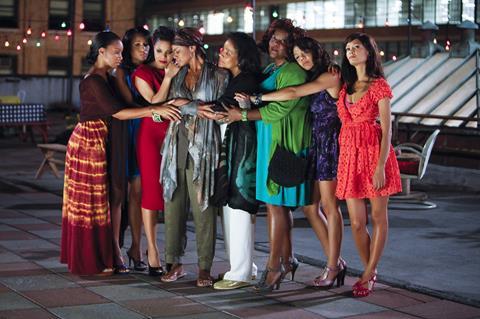 Looking to dramatise the daily hardships of African-American women by focusing on nine diverse black females living in Harlem, director Tyler Perry drowns in soap-opera theatrics with For Colored Girls. Based on a Tony-winning 1974 musical play by poet-dancer Ntozake Shange, this adaptation too often screams and cries when it should be offering searing drama, and its long running time becomes tortuous once the characters start experiencing their individual cathartic revelations in the film’s final third.

Unspooling domestically November 5, this Lionsgate release will target Perry’s steady, reliable fan base, which generally guarantees his non-Madea films a gross between $30m to $60m. For Colored Girls will have the advantage of being the only wide-release drama for several weeks, but without any marketable names in the cast, crossover to a larger audience seems unlikely.

For Colored Girls introduces us to a series of New York City women – some related to one another, others more tangentially connected – who are each navigating through typical contemporary issues: career, family, love. They include Jo (Janet Jackson), a tightly-wound magazine editor, Tangie (Thandie Newton), a promiscuous cocktail waitress, and Crystal (Kimberly Elise), Jo’s assistant who is trying to keep her family together now that her soldier boyfriend (Michael Ealy) is back from the Middle East and suffering from PTSD.

Shange’s original play consisted of spoken-word poetry that was supplemented with music and dance, and Perry has sought to maintain the integrity of the poems by giving many of the characters long, flowery soliloquies that represent their innermost feelings. Unfortunately, Perry’s attempt to meld Shange’s words into an ensemble drama in which the characters mostly speak in plain dialogue proves to be jarring and, at its worst moments, crushingly pretentious.

Credit is due to a cast that performs Shange’s poems with a full-bodied intensity that at times is utterly fearless, but unfortunately the roles border on the stereotypical, resulting in paper-thin approximations of real people forced to serve as symbols of women’s suffering. Even worse, Perry’s treatment of the volatile subject matter – including plot twists involving abortion, rape, murder, and HIV – is intensely heavy-handed, the filmmaker never relying on subtlety when he can deliver his shocks with the grace of a sledgehammer.

Screenplay: Tyler Perry (based upon the stage play For Colored Girls Who Have Considered Suicide When The Rainbow Is Enuf written by Ntozake Shange)