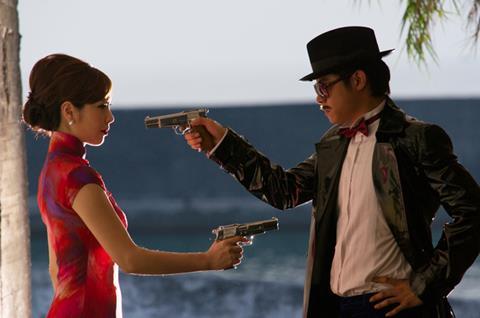 A charmingly whimsical comedy romance that plays affectionate tribute to late 1960s heyday of Taiwanese language cinema, Forever Love is a sweet-natured film largely told in flashback, featuring strong and charismatic lead performances by Blue Lan and Amber An. The film has the style and rom-com factors to work locally, and the frothy film industry backdrop could make it appealing to other festivals.

The film is brimming with charming moments, and despite being entirely predictable is a gentle delight, with the performances all pretty much spot on and the recreations of the heyday of Taiwanese cinema engagingly staged.

Forever Love, which premiered in Taiwan recently, glossily blends old-fashioned romantic themes with some amusingly recreated sequences from 1960s Taiwan filmmaking – with black-and-white scenes and animation thrown in for good measure – and makes good use of its good-looking leads, model-turned-actor Blue Lan (aka Lan Zheng-long) and Amber An (aka Amber An Xin Ya), who was named the world’s sexiest woman by FHM’s Taiwan edition.

The film opens in contemporary Taiwan with 18 year-old Jie talking fondly about her all-action grandfather Liu Chi-Sheng (played by Long Shao-hua) – he surfs, boxes and rides his mountain bike aged 70 – who loves to tell her tall stories about his time working as a screenwriter in Hollywood Taiwan.

When he is hospitalised after a biking accident she visits him on the ward, and he tells her the story of how he met her grandmother, who he is increasingly worried about she is suffering from dementia and cannot really remember him. His story flashes back to 1969 when he (as played by Blue Lan) was writing multiple scripts, but increasingly annoyed by the clichéd films he has to make

Things change when he meets wannabe actress Chiang Mei-Yue (Amber An) when she sneaks into the premiere if his latest film Spy No. 7, mainly to try and catch a glimpse of the films star Wan Bao-Long. He helps get her through an audition, and the pair start a tentative romance, and when is forced into directing the sequel – Spy No. 7: On The Moon For Love – and manages to get a bigger and bigger role for her.

Though perhaps a little too long, the film is brimming with charming moments, and despite being entirely predictable is a gentle delight, with the performances all pretty much spot on and the recreations of the heyday of Taiwanese cinema engagingly staged.