Over the past 40 years, the UK film industry has had its share of creative and financial ups and downs. Screen tracks its progress from the depression of the mid-1980s to the highs of recent years. 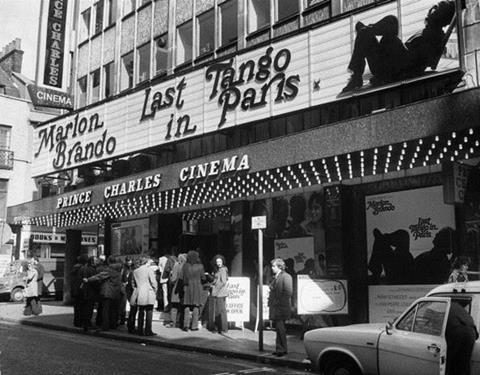 In the mid-1970s, the British film industry was at a low ebb. The euphoria of swinging London had well and truly worn off. The cinemas were full of exploitation fare; Emmanuelle, which played for months at the Prince Charles Cinema, was breaking records for its distributor, New Realm Pictures, and was still riding high in London’s top 10. So was The Happy Hooker.

“In fact, it has been a pretty disastrous year altogether,” an article on the front page of the first issue of Screen International, in early September 1975, cheerily proclaimed. The journalist (and future Screen editor) Quentin Falk expressed some hope that British production would soon “jerk” back into gear after a “fairly barren summer”.

Only 28 films had been made in Britain so far that year — as opposed to 49 for the same period in 1974 — but, Falk suggested, there were “signs, definite signs”, that a recovery was imminent.

“Screen International is what we have all been waiting for,” the Samuelson brothers wrote in a letter printed on the front page of issue two. “At last we have a prestigious journal to show the world that there is a British film industry to be proud of.”

Yet UK cinema admissions were falling. They plummeted to 103 million in 1976, down from the all-time high of 1.6 billion, and would carry on their downward spiral, reaching a nadir of 54 million in 1984.

On the more positive side, and a portent of better times ahead, big American movies were starting to shoot at British studios; among them Star Wars, which had taken up residence at Elstree in 1976.

“At last we have a prestigious journal to show the world that there is a British film industry to be proud of” - Samuelson brothers, writing in Screen

Despite the increased American presence, however, the British industry remained insular and the establishment did not welcome the fact that the most powerful figures in UK film during the 1980s were, in fact, Israeli cousins Menahem Golan and Yoram Globus.

Bosses of the hugely popular Cannon Films, with credits including Chuck Norris action movies and Robert Altman dramas, they were internationally minded, working with directors and distributors from all over the world and acquiring leading British art-house distributor Gala Films to give the company some cultural credibility.

And by 1986, after their purchase of Thorn EMI Screen Entertainment, they owned the UK’s ABC Cinemas chain. (The owners had originally refused to sell to them but Golan and Globus simply bought EMI from Australian entrepreneur Alan Bond, who himself had acquired the firm only a week before.)

The Oscar success of Chariots Of Fire (1981) did give British production a psychological boost, and enabled its screenwriter, the late Colin Welland, to issue his famous rallying cry, “the British are coming”, at the Academy Awards.

And from the mid-1980s onward, helped by the building of swanky new multiplex cinemas (notably The Point in Milton Keynes) and the cheerleading of key industry figures during 1985’s British Film Year, audience figures began to rise again.

The British production sector, though, remained in a parlous state. Local producers weren’t helped by the 1985 abolition of the Eady Levy (a tax on box office receipts that fed back into production). The National Film Finance Corporation, founded in 1949, was also disbanded and a new body, British Screen Finance, was set up in its place.

Production company Goldcrest did have some successes — The Killing Fields (1984) and The Mission (1986) — but became overextended and eventually collapsed.

One important new player in British film production in the 1980s, however, was Channel 4; launched in 1982, it backed some of the era’s notable low-budget films including Neil Jordan’s Angel (1982), Peter Greenaway’s The Draughtsman’s Contract (1982) and Stephen Frears’ My Beautiful Laundrette (1985).

Video distribution company turned theatrical distributor Palace Pictures moved into production and was behind such critical and commercial hits as Mona Lisa (1986) and The Crying Game (1992) but, likewise, hit the reefs.

In the summer of 1990, various UK film industry potentates met with prime minister Margaret Thatcher and Universal boss Lew Wasserman for a seminar and, in hindsight, this Downing Street film summit is seen as the event that transformed British production.

Proposals were made that eventually led to the setting up of a £5m European co-production fund, administered by British Screen and tasked with “promoting collaboration between British film producers and other film producers in the European Union”.

This European emphasis was of great importance. During this period, British films had been noticeable by their absence at the major European festivals but that was gradually to change. Terence Davies’ Distant Voices, Still Lives won the Golden Leopard at Locarno in 1998. Ken Loach’s Hidden Agenda, backed by Hemdale (the company behind The Terminator), won the Jury Prize at Cannes in 1990 and, three years later, Mike Leigh won Cannes’ Best Director award for Naked.

British film was clawing back critical respectability; both Leigh and Loach would go on to win Cannes Palme D’Ors for Secrets & Lies (1996) and The Wind That Shakes The Barley (2006) respectively.

From an industry perspective, lines of communication were now being opened up with the government. The crucial moment came in 1994 when, as David Puttnam wrote in a 2010 New Statesman article, “at the urging of Richard Attenborough, the then prime minister John Major agreed to National Lottery funds being used to support film production”.

Lottery funding was to have an utterly transformative effect on the British film business. At the time that lottery money was first being invested in British films — with initially mixed results — a dynamic new company, PolyGram Filmed Entertainment, was transforming attitudes towards marketing and distribution, using techniques borrowed from advertising and the music industry.

PolyGram’s successes ranged from upscale, sophisticated romantic comedy Four Weddings And A Funeral (1994) to Danny Boyle’s scabrous and wildly energetic Trainspotting (1996), both of which enjoyed huge critical and popular success domestically and internationally, as well as big populist hits like Bean (1997), Spice World (1997) and The Borrowers (1997).

PolyGram was to fold in the late 1990s, as its parent company Philips lost faith in its expansionist approach, but its philosophy was heavily influential in The Bigger Picture, the 1998 report of the government’s Film Policy Review Group, which set out to boost domestic share for British films and to create “a sustainable British film industry”.

PolyGram’s tactics were also evident in the “distribution pull, production push” approach of new public film body The Film Council, founded in 2000 and later re-branded UK Film Council. Rather than invest in one-off productions, the talk was about long-term thinking and creating vertically integrated companies with the marketing power and access to distribution enjoyed by Working Title, which was the most successful British production company of the time — albeit one that eventually fell under the ownership of Universal.

In the late 1990s and early 2000s, the massive box office success enjoyed by lowish-budget local British films like The Full Monty (1997) and Billy Elliot (2000) — both of which were distributed by Hollywood majors — more than proved that British stories could find big audiences abroad as well as at home.

During this period, the government was committed to encouraging private investment in the UK film industry and, in 1997, Tony Blair’s Labour government handed tax breaks to film-makers. Section 48 tax relief allowed producers to write off 100% of first-year production costs on movies budgeted at under £15m, while Section 42 allowed investment in bigger-budget movies to be written off over three years. These breaks were well meaning, but provoked a damaging gold rush mentality.

Investors looking for tax relief — and, critics suggested, searching for ways of avoiding tax altogether — rushed to pump money into British films through the many partnerships and schemes set up by ‘middlemen’ companies. Section 42 and 48 were scrapped in 2006 and replaced with a new tax credit system but, through the law of unintended consequences, co-production figures nose-dived as result. Once considered the most desirable co-production partners, the Brits were now shunned.

Plans to shut down the UK Film Council were announced by the coalition government in the summer of 2010 as part of the “bonfire of the quangos”. The huge box-office and awards success of The King’s Speech, which UKFC had backed at an early stage, was a vindication of its work — but arguably one that came too late. Following its demise, the British Film Institute became the lead public agency for film in the UK.

The changing fortunes of British film have been reported on in considerable depth by Screen International, which had long since become known as the voice of the UK industry. In 2015, the industry looks considerably healthier than it did in the dog days of 1975. While the usual anxieties and uncertainties remain as film adjusts to the digital era, over the past 40 years the Brits have gone at least some of the way toward the promised land of a “sustainable film industry”.