Frank Miller’s Sin City: A Dame To Kill For 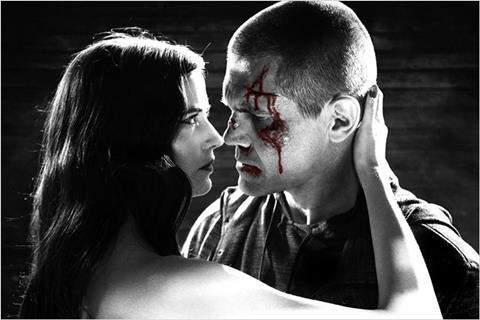 2005’s Sin City is one of filmmaker Robert Rodriguez’s best movies because its innovative green-screen technique freed him to indulge fully in the overblown comic-book aesthetic that’s long been his giddy trademark. The belated return trip proves less rewarding. Sin City: A Dame To Kill For sports a similarly striking look, and the actors’ hard-boiled exuberance is apparent at each turn. But this sequel, which starts off promisingly, soon bogs down, its relish for tawdry, hyper-violent titillation eventually becoming as monochromatic as the black-and-white images.

The showiest role belongs to Green as Ava, a knowing riff on the standard femme fatale that’s all scene-chewing bitchiness.

Arriving in the States (and UK) on August 22, Dame will cater to fans of the original Sin City (not to mention the graphic novels written by Dame co-director Frank Miller). Sin City remains among Rodriguez’s biggest overseas hit (almost $85m), as well as his most successful non-Spy Kids entry domestically ($74m). But considering that it’s been nine years since the first film, Dame may not have the same commercial ammo. A cast that includes Bruce Willis, Jessica Alba and 300: Rise Of An Empire’s Eva Green will raise awareness, but this late-summer offering may not be able to whip up enough enthusiasm at a time when many moviegoers are focusing on the forthcoming Labor Day holiday, the return of school and other concerns.

Based on Miller’s comic books — he’s credited with the screenplay — Dame cuts between storylines like the original film did, introducing some new characters while bringing back familiar faces. The stripper Nancy (Alba) vows vengeance on Senator Roark (Powers Boothe), whom she blames for the death of her beloved cop protector John Hartigan (Willis). Elsewhere, suave gambler Johnny (Joseph Gordon-Levitt) challenges Roark to a high-stakes poker game, while tortured private eye Dwight (Josh Brolin, replacing Clive Owen from the first film) gets ensnared in a plot with his tempestuous former lover Ava (Green).

Filmed entirely on green screens and presented in black-and-white, with bold colour occasionally thrown in as evocative accents to the action, Sin City had the vividness and unreality of a great graphic novel, crafting a world wholly divorced from ours. This worked to Rodriguez’s benefit: a filmmaker forever enslaved by his boyish fondness for sexy babes and B-movie thrills, he could deliver a sufficiently amoral, pungent slab of pop-noir that was pure down-and-dirty escapism.

Dame boasts the same visual and thematic strategy, happily jumbling chronology so as to flaunt his and co-director Miller’s disregard for “proper” storytelling structure and internal logic. (Characters who died in the first film are miraculously alive for this new outing.) And while Rodriguez’s subsequent films (specifically Machete and Machete Kills) have grown increasingly cartoonish, Dame feels appropriately outlandish since its dreamlike environment need not adhere to the laws of the natural world.

But with that said, Dame’s ever-increasing amounts of violence (decapitations, crushed skulls, plucked-out eyeballs) and salaciousness (female nudity and cheesecake abound) lack the sense of shock and liberation that made Sin City so unapologetically entertaining. Where the original film balanced Rodriguez’s excesses with a strong command of mood, Dame tips toward overkill at the service of empty sensation.

This imbalance is partly due to a lack of the pointed, haunted individuals that were all over Sin City. Rodriguez has never shown much interest in fleshing out his characters, but he knows how to emphasise archetypes, which made the first film feel like it was populated by larger-than-life noir icons. But Brolin’s Dwight and Alba’s Nancy grow less interesting the longer they’re on screen: They’re ciphers that Rodriguez manipulates with less confidence than their digital backgrounds.

The showiest role belongs to Green as Ava, a knowing riff on the standard femme fatale that’s all scene-chewing bitchiness. Green has a ball playing the dangerous sexpot who gets her hooks into Dwight, but once the character is established, there’s nowhere for her to take it. Unlike the great femme fatales, Ava is merely an object for us to ogle, her consistent state of undress a sop to the male gaze as opposed to an expression of the character’s empowerment.

Still, Dame’s stupendous visual palette alone is almost enough to recommend the film. Rodriguez also shot and edited this sequel, and it has a decent amount of forward momentum, goosed along by all the different characters’ pitiless voiceover narrations and the clever ways the filmmaker finds to stage his land of perpetual midnight. The tone remains persuasive, but there isn’t enough inside those gorgeous frames to die (or kill) for.