Garo And The Wailing Dragon 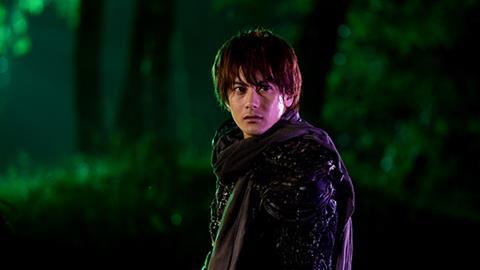 The Garo fantasy adventure television series (and spin-offs) has had little distribution beyond Japan and a few other territories, but this special effects laden theatrical off-shoot is a colourful enough romp to be a hit in Japan and could also appeal to fantasy festivals keen to embrace its family-friendly brand of swords, magic, monsters and mayhem.

While at times the freewheeling adventure is odd to the extreme it is also in the great tradition of anime and manga, brimming with strange characters, outrageous costumes and a simple intention to entertain.

Garo And The Wailing Dragon – noted as ‘tentative title’ at its world premiere screening at the Tokyo International Film Festival – may be blissfully unfathomable to those unfamiliar with the original series, but at heart its storyline is simple good against evil. Set to be released in Japan in February, it shot with the title Garo: Soukoku no Maryu (which has a literal title of Garo: Demon Dragon Of The Blue Cries), and is aimed as an epilogue to the second season Garo: Makai Senki that began in October 2011.

The original series Garo (which literally translates as ‘Fanged Wolf’), was screened on TV Tokyo in 2005/2006 and has seen spin-off films (such asGaro: Red Requiem in 2010) and video game Golden Knight Garo, as well as a popular line of toys and figures. The series focuses on the life and battles of Kouga Saejima (played by Ryosei Konishi in both series and films), who has assumed the title of Makai Knight to protect humanity from demons called ‘Horrors’. He is aided in his quest by a magical sword and special cloak, and is advised by a ring named Zaruba.

In Garo And The Wailing Dragon, Garo travels to the Promised Land o search for the Fang of Sorrow, with the help of blue-skinned elfin magical being Beru (Anri Okamoto), who Garo rescues, and a colourful scarecrow character named Kakashi (Yuki Kubota), who has his own strange craft and is after the Fang himself. Against them is the witchlike Juman (Keiko Matsuzaka), who plans raise the Dragon (which never actually does any wailing) as a plan against humanity.

Garo, known for his inability to smile, is as usual decked out in black leathers accessorised with a long grey scarf (which he swirls a lot), and while he is a less than charismatic figure Ryosei Konishi is at ease in the role, knows how to pose manfully and appeals to the youthful fans of the series. He moves slickly and handles the swordplay with ease. Anri Okamoto is a charming addition as the Tinkerbell-like Beru, while Yuki Kubota perhaps has the most fun as the wacky Kakashi, part Scarecrow from The Wizard Of Oz and part action–hero.

Karo’s writer/director/creator Keita Amemiya layers on the colourful special effects – which vary from TV-show quality to quite high end – and while at times the freewheeling adventure is odd to the extreme it is also in the great tradition of anime and manga, brimming with strange characters, outrageous costumes and a simple intention to entertain.