Alun Armstrong tells some funny tales about how he got cast, against the odds, in his first screen role in Get Carter. 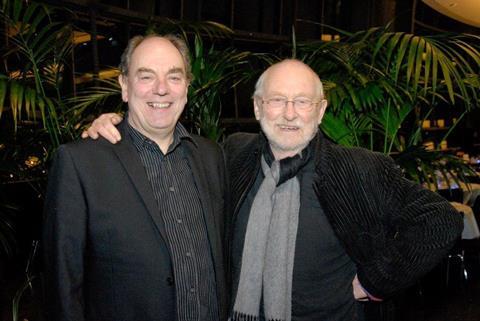 I’ve already written about the Get Carter anniversary weekend in Newcastle a few weeks ago, where everyone was utterly charmed by Mike Hodges. But now I have to also share this picture of Hodges with actor Alun Armstrong. They made a great double act that weekend (also at the regional RTS awards, where Hodges was quite moved to receive a special honour), with Armstrong telling some particularly funny tales about his screen debut in Get Carter. It turns out he was charmingly clueless when he went for the role — he heard MGM was shooting a film up North and just wrote them a letter saying he was an aspiring Geordie actor. Miraculously, they called him back, and asked for his headshot — so he sent a photo booth passport photo! And even more miraculously after that, he got invited to meet with Hodges in London. The rookie asked if he could bring his girlfriend along for the trip (he could). Thankfully they bonded over a nice cup of tea at Hodges’ flat and the rest is film history.