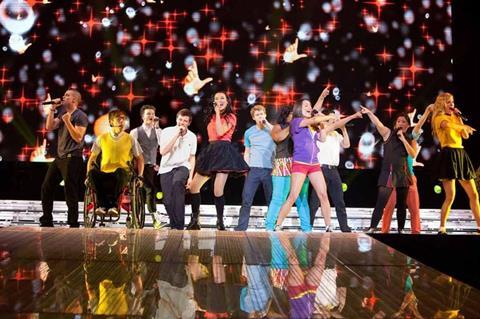 A cinematic smart-bomb of heavily processed yet still not entirely inescapable sunny uplift, Glee: The 3-D Concert Movie mixes almost two dozen energetically pitched musical numbers from the series’ recent spate of concert dates with laudatory audience testimonials and footage of three different teenage fans for whom the show’s embrace of diversity and individualism has made a difference. The movie is chiefly just a cash-grab hymnal to the choir, but briskly paced enough to still remain inoffensive to those outside of its prescribed demographic.

The action is exceptionally well lit for a concert film, evidencing none of the troubles with screen darkness sometimes associated with 3-D presentations.

An advertised short theatrical window (it’s being limited to a two-week release Stateside) will enable the film to drive turnout upward, especially for those who do not live in a market where the shortened tour was able to stop, but teenage competition from Final Destination 5 and 30 Minutes or Less will be especially strong. Therefore, Glee: The 3-D Concert Movie should see most of its returns via strong domestic ancillary value, since fans will undoubtedly embrace it as a keepsake document.

A scripted hour-long Fox television show centered around a high school chorus club, Glee, now entering its third season, is a pop cultural juggernaut with massive crossover success into the musical market. Filmed over two days at the IZOD Center in East Rutherford, New Jersey — which were dates in a 40-show North American Glee Live! concert tour — Glee: The 3-D Concert Movie is a glossy piece of adjunct entertainment.

Interspersed with its songs is footage from outside concert venues of fans singing the show’s praises, plus interviews with a dwarf, a girl with Asperger’s Syndrome and a gay teen boy, all of whom have found some measure of relief and identification in the show. Despite general thematic/lyrical syncopation, the juxtaposition of these moving bits with the super-slick production is sometimes slightly jarring.

Kevin Tancharoen, who has experience as a director (Fame), choreographer and editor, keeps things moving at a nice pace. And the action is exceptionally well lit for a concert film, evidencing none of the troubles with screen darkness sometimes associated with 3-D presentations.

If there’s an overriding problem, it’s that a significant handful of the 23 musical numbers are choppy and over-edited. Contrasted with something like the smooth, fluid camera movements of 2008’s U2 3D, the editing seems driven to use as many audience cutaways as possible, in a hammy effort to further increase identification. This works against the naturally building rhythms and catharsis of the songs, though, especially in a performance of Cee-Lo’s “Forget You” by series guest star Gwyneth Paltrow, and the movie’s opening song-and-dance number of its anthem, “Don’t Stop Believin’.”

The actors, all of whom stay in character for brief interstitial backstage bits, are a talented and appealing bunch, but the fairly equal division of stage time allows for no huge individual breakouts.