Gnomeo & Juliet returns to the summit in the UK

eOne’s animation-comedy Gnomeo & Juliet returned to the top of the UK box office over the February 25-27 weekend, grossing $4m (£2.5m). 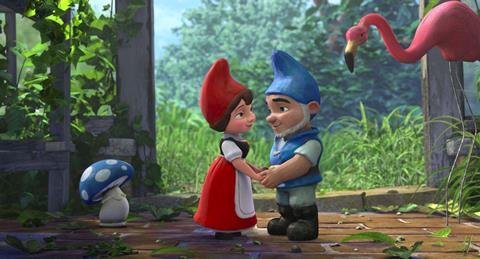 Boosted by the half-term break, the U-rated animation musical could draw in a larger demographic than 15-rated Paul and Disney’s 12-rated newcomer I Am Number Four.Gnomeo is now the distributor’s third biggest film in the territory behind Twilight: Eclipse and Twilight: New Moon.

Disney’s third-placed action-adventure I Am Number Four was the highest of the week’s six new top-20 entries. DJ Caruso’s latest, about a high-school teen masking his true identity in order to elude his deadly enemies, made $2.6m (£1.6m) from 393 screens.

In the week it won four Oscars (Best Actor, Best Picture, Best Director and Best Original Screenplay), Momentum’s The King’s Speech scored a further $1.9m (£1.2m) from a week-high 540 locations (the drama played on 33 more screens than in its seventh week).

Paramount’s romantic-comedy No Strings Attached debuted in eighth, scooping an unremarkable $1.6m (£978,974) from 361 screens. The film is Ivan Reitman’s first directorial turn since 2006 comedy My Super Ex-Girlfriend and only his third since 2001 comedy-sci-fi Evolution.

This week sees saturation releases for Optimum’s Unknown, Universal’s The Adjustment Bureau and Parmount’s Rango, while Warner’s Ironclad gets a wide launch.