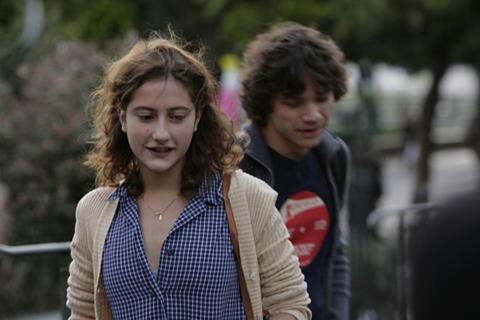 Goodbye First Love (Un amour de jeunesse), Mia Hansen-Love’s third feature as writer/director, presents a conundrum. Praised to the skies and beyond by French scribes, this Locarno Competition title is either a sustained, brilliantly modulated act of cinematic grace for which all serious filmgoers should be grateful, or a patience-testing exercise in compound nebulousness that comes perilously close to being a caricature of a boring European art film.

The film’s effectiveness boils down to whether or not we care about the fallout from Camille’s all-or-nothing view of romance and coupledom.

At the film’s outset in 1999, 15-year-old Parisian Camille (Lola Créton) is completely wrapped up in her compulsive love for Sullivan (Sebastian Urzendowsky), her 19-year-old lover-cum-soulmate. Before he takes a 10-month trip to South America he tells her “It isn’t the end of the world.” But for her, it is. This is a sentimental education where it takes forever to get a diploma. Hansen-Love portrays the aftermath of first love as a form of post-traumatic stress syndrome.

Too sincere to be called pretentious, the film is a record, in three acts (set mostly in 1999, 2003 and 2007) of Camille’s progress toward a life no longer ruled by her pining for Sullivan, whose letters from another continent cease to arrive while he’s still across the ocean.

The film covers almost a decade in elliptical bursts that would be wrenching if one had an emotional investment in the central character. But young Camille is dour, cranky and unreasonably possessive and Sullivan’s alleged charm is muted. They ride a horse through a field, they pull fruit off a tree while insects hum -we have a privileged window on their intimacy but they remain ciphers.

Sullivan has not led her astray or ruined her reputation. There is no threatening social subtext. So the film’s effectiveness boils down to whether or not we care about the fallout from Camille’s all-or-nothing view of romance and coupledom. While it’s safe to assume that most humans past puberty have experienced gradations of passion, rejection and fulfilment, we are given precious little to care about.

Obliged to move forward although her emotions are still pegged to the past, Camille attempts suicide the same way she does everything else - not as a grand gesture but as an insular, barely perceptible one.

Not every teen actress has the miraculous good fortune to be in Elle Fanning’s league but Lola Créton performs as if her major instructions were to be a faintly irritating blank slate unaware that inflection is a real plus in human speech. (Non-francophones may not mind if carried along mostly by subtitles, but Camille delivers her lines, whatever their importance, in a cadence that could be subtitled as “Whatever…whatever…whatever…word, word, another word.”)

What does the film get right?  Paris in the snow. The anticipation of a letter in an envelope with a stamp on it arriving in a physical mailbox.

Fifty minutes or so into an overlong 110 minutes, the first major character with a pulse is introduced - Camille’s architecture professor, Lorenz (Magne-Havard Brekke, excellent), many years her senior.  She falls for him and he for her, although what this smart and charming man sees in Camille is unclear.

After years of grappling with yearning and residual sorrow she still delivers bland pronouncements as if living in a low-energy rehearsal rather than a realm in which the camera is, in fact, running. If the point is that molecules of our most intense experiences eternally inhabit the present-continuous of our lives, an occasional spark on screen wouldn’t hurt. Matters perk up slightly when Sullivan and Camille meet again. Those potent early emotions vibrate still.

Hansen-Love’s 2007 debut All Is Forgiven was promising but uneven. Her accomplished 2009 feature The Father Of My Children captured the manic juggling act of a Paris-based film producer and family man burning his candle at both ends. It had energy, as well as joy and sorrow. But why Goodbye First Love should have superlative-spouting tastemakers tripping over themselves to anoint Hansen-Love as the 30-year-old female reincarnation of François Truffaut is close to inexplicable.