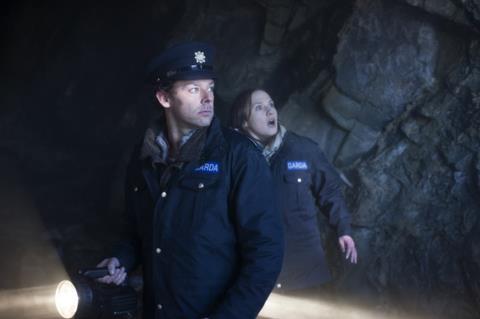 This little Irish genre movie is like everyone’s favourite parts of Tremors and The Guard rolled together.  Given that aliens have been paying more attention to the British Isles of late, this might well appeal to audiences who have responded to such UK-based efforts as Attack The Block and Storage 24, but offers a warmer, weirder human story to go with its excellent CGI monster effects.

Grabbers shows that it is still possible to make an inventive, exciting, entertaining invasion-from-outer-space picture on reasonable resources.

Something from outer space falls into the sea near an island off the Irish coast, and bloodsucking tentacle-creatures emerge to terrorise the locals.  The fact that the invaders react to alcohol like Superman to kryptonite, which gives long-term hard-drinking Garda Ciarán O’Shea (Richard Coyle) an excuse to order a lock-in at the local pub and insist his uptight temporary superior, Lisa Nolan (Ruth Bradley), get drunk for the first time in her life, even as he straightens up his act and becomes a resolute, resourceful hero.

‘Hey everybody, it’s all right, it’s grand,’ declares a tipsy Lisa in one of the least-reassuring statements committed to film. ‘There’s nuttin tryin ta kill ya.’  Coyle and Bradley are very winning leads, bickering and bonding between the monster attacks and enjoying the snappy exchanges and put-downs (‘How much have you had?’ ‘Not enough to fancy you.’ ‘Well then, keep drinking.’).

Grabbers seesaws confidently between Irish cynical whimsy – itself no easy mix to capture, as too many ‘Oirish’ films have shown – and science fiction thrills.  Though the denizens of the pub keep up the wry patter (‘I say we feed it Father Potts - unless it eats shit it’ll choke itself to death’) and some of the horrors have a slapstick edge, it delivers proper excitement and awe as the alien invaders are seen off.

It’s a pleasing revival of the invaded island sub-genre of Island Of Terror and Night Of The Big Heat, and fits into that curiously British (and now Irish) genre of pub-under-siege picture, as seen in vintage items like Devil Girl From Mars and Strange World Of Planet X.  TV genre fixture Russell Tovey (Being Human) pops in as an English scientist who enthusiastically dissects and analyses specimens, gets amusingly drunk with the rowdy locals – familiar faces like Ned Dennehy, David Pearse and Bronagh Gallagher prop up the bar – and then gets swatted into the night by a giant angry squid.

With the bloated example of Battleship on one side and numberless SyFy channel knock-offs like Battle: Los Angeles on the other, Grabbers shows that it is still possible to make an inventive, exciting, entertaining invasion-from-outer-space picture on reasonable resources.   Kevin Lehane’s smart script is canny enough to sidestep the expectations of fans who might think they know how films like this are supposed to play out, while the monsters are as well-realised as anything in far more costly productions.

Director Jon Wright scripted the weak online serial Beyond The Rave, then directed the solid British teens-in-terror picture Tormented; this is a big step up in ambition and effect. Grabbers screened at the Edinburgh Film and shows at the upcoming annual London genre event FrightFest.