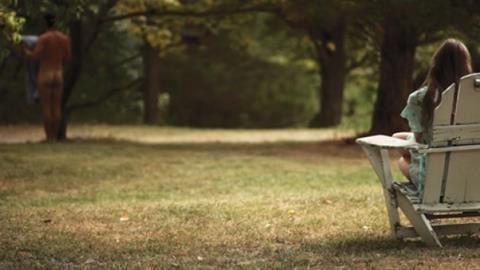 Green is a three-hander that threatens to become a ménage-a-trois between a young man, his girlfriend, and a young woman whom they befriend. It never does; it is much more than that overused device, a highly original take on jealousy and insecurity between females, written and directed by a woman. The male is not much more than a catalyst.

Takal, who claims she was under the influence of Ozu’s style during production, is her own editor, and an excellent one at that.

The film is solidly executed by director/screenwriter Takal, whose understanding of the power of a cut or a two-shot or the perfect moment to interject musical chords is especially surprising for a 25-year-old first-time filmmaker who made it on a shoestring budget over two separate weeks. In between the actors improvised. What emerged Takal used to alter and lengthen what had been a sketchy script.

Green garnered Takal something called the Chicken and Egg Narrative Woman Director prize at the SXSW Festival, where it had its world premiere. Since then it has played successfully at several American festivals and generated numerous extremely positive reviews and features. Will this unexpected success, which, strangely enough, hasn’t landed the film a stateside distributor, catch on beyond US borders?

Even though Green lacks frills (intentionally) and name actors, the novelty of its subject and its impressive mastery of form could make a significant dent in both English- and foreign-language niche markets once international festivals introduce it abroad. Distributors could attract viewers with a campaign grounded in its unusual subject and style. A modicum of fine-tuning, especially in the sound department, would increase the chances for international pickup.

The storyline is fairly simple, the better to highlight the twisted mental zone that the cerebral girlfriend, Genevieve (Sheil), retreats to late in the film. She, an aspiring critic who works in a bookstore, and significant other Sebastian (Levine), an annoying, pretentious writer (the film opens at their apartment with him pontificating on whether Proust or Philip Roth is the better novelist), have left their hip-artsy confines in Brooklyn to live in rural West Virginia for up to a year. He has a purpose: a humorous blog on the sustainable farming he will engage in near their rented house. Genevieve has no plans, save standing by her man. Although intellectually opinionated, she is more an appendage of Sebastian than an actualized individual.

From the very beginning, neighbour Robin (Takal), whose southern logorrhoea is purposely excruciating, “intrudes” (Genevieve’s word, but only after Robin pushes her jealousy buttons) on the couple’s faux paradise. Most of their references are over Robin’s bumpkin head. During intimate scenes, we see that Genevieve and Sebastian’s relationship has unresolved problems. Almost imperceptibly—a furtive glance, a sly rubberneck—Robin flirts with Sebastian. Genevieve begins to fill in the blanks. She has a premonition of Robin’s sly intentions that’s both paranoid and valid. Not that Sebastian is any great prize, but the momentum of Green is powered by the question: Which of these women will win this human turf war?

Genevieve hallucinates Sebastian and Robin making love outdoors, which prompts her to undress and have sex with him under the shower. Nature had been presented as a calming force early in the film, with magnificent shots of tall trees and brush from a relaxed Genevieve’s point of view. When she starts to lose her grip on reality, however, the surroundings become frightening, sinister.

In order to flesh out the dynamic between the women, Takal often pans from one to the other during a conversation, rather than cut between shot and reverse shot. (She pointedly has several two shots of the females with Sebastian horning in invasively from the side.) For balance, she includes bonding scenes in which the urban intellectual and country girl take long walks and find common ground in the mundane: buying kites at the fair, discussing bosses who have come on to them, even sharing their passion for ice cream. Their connection is complex, never simplified, until perhaps at the end, when the director chooses closure where ambiguity might have been more in line with the spirit of the movie.

The music by Ernesto Carcamo and sound design by Weston Fonger are exemplary: haunting, ominous, intentionally monotonous chords that signal psychic disruption oh so discreetly. Not surprisingly, Takal, who claims she was under the influence of Ozu’s style (long takes, minimal montage) during production, is her own editor, and an excellent one at that: She knows when to lay off.