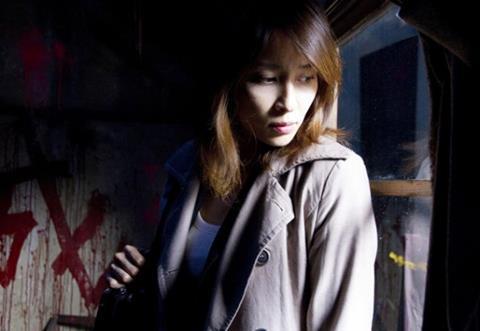 Guilty Of Romance focuses on an unsatisfied bourgeois housewife, a married lower-middle-class cop, and a highbrow professor by day, uninhibited prostitute by night, all of whom dive into forbidden worlds of sexual pleasure.

Shown in Cannes in a seemingly endless 143-minute director’s cut, the release version will shed around 45 minutes. Even at the shorter length, the cult reputation of the eccentric Sono, poet, novelist, and filmmaker (Suicide Club, Cold Fish) will not guarantee much interest in this third movie in his “Hate Saga” (a provocative,  intentional misnomer) on the domestic front, and minimally in foreign territories, save for some loyal Asian film buffs and a few festivals that foreground Asian movies.

Divided into five “chapters,” Guilty Of Romance focuses on an unsatisfied bourgeois housewife, a married lower-middle-class cop, and a highbrow professor by day, uninhibited prostitute by night, all of whom dive into forbidden worlds of sexual pleasure. Every so often we see or hear about the unidentified mutilated corpse of a beautiful woman, whose organs of pleasure such as the clitoris have been removed, that has been found in the red-light zone. Ultimately the body will serve as the principal narrative link among the three women.

The main character, Izumi (Kagurazaka), subservient to her demanding and seemingly straight-arrow husband (Tsuda), is just plain bored with the routines of marriage. They agree she could use some distraction, so she takes a job in a supermarket. After meeting a manipulative procuress on the job, she becomes a nude model for feigned sex, then begins an affair with her handsome co-star. The floodgates open. This formerly meek woman turns aggressively to prostitution (the leap completely lacks credibility), all the while maintaining her wifely demeanour at home. Typical of Sono’s juvenile attempts at comedy is the fact that her job in the grocery star is hawking large sausages.

Izumi becomes an acolyte of the calculating Mitsuko (Togashi), the academic who maintains that her nocturnal persona “empowers” her. A born cynic, she teaches the naïve Izumi the ropes and advises her, “When you fuck a man you don’t love, it has to be for money.” In one of the film’s only mildly inventive scenes, Mitsuko arranges for a red-wigged Izumi to take on as a client her own unsuspecting husband. He is obviously as bored with their dead-end marriage as she is.

The third woman, and the least explored (she gets off chiefly on phone sex when her husband and son are not in hearing distance), is the policewoman, Kazuko (Mizuno), assigned to the case of the dismembered corpse. In flashback, Sono reconstructs the murder and the role of each of the women in it. The perpetrator is a minor character introduced earlier as a total sweetheart. The irony is of momentary interest, but not enough to eradicate the redundancy and lazy directing of the previous 142 minutes.