Hara-Kiri: Death Of A Samurai 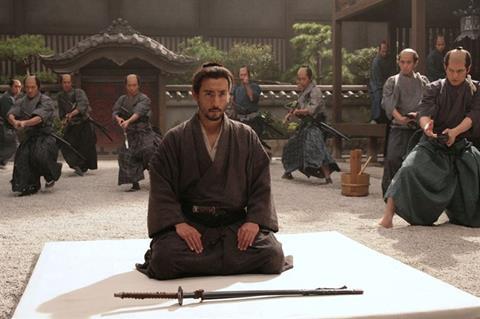 The combination of cult director Takashi Miike, a classic saga of samurai honour and 3-D creates a level of expectation that Hara Kiri: Death Of A Samurai is unable to meet. Anyone anticipating an action-packed companion piece to last year’s 13 Assassins will need to adjust their thinking to accept something akin to a stately, slow-burning Shakespearean tragedy in which a blade is barely raised in anger before the final twenty minutes.

The required glasses cloud the film with an olive fog that dulls the lustre and precision of the often exquisite colour photography.

Patient audiences are rewarded with a beautifully crafted story of suffering, sacrifice and vengeance that gradually gains in emotional weight over the course of two long hours. Commercially, it will struggle to match the success of 13 Assassins.

The remake of Masaki Kobayashi’s 1963 classic begins in 1634 as Hanshiro (Ebizo Ichikawa) arrives at the House of li asking if he may use the courtyard as the setting for his ritual suicide. Before granting the request, the prefect of the house Kageyu (Koji Yakusho) tells him the story of a penniless young man Motome (Eita) who recently called to make the same demand. In a time of peace and massive unemployment,

Impoverished samurai have been extorting money by threatening suicide in the expectation that wealthy owners will pay them not to carry out the deed. In the case of Motome, Kageyu had been persuaded to call his bluff leading to the film’s most excruciating sequence in which he tries to take his own life with a dull bamboo blade that wouldn’t cut butter. What Kageyu doesn’t know is the connection between Motome and Hanshiro, a relationship that is traced in extensive flashbacks.

At first the flashbacks appear somewhat ponderous and a little dull as we learn of what lead Motome into such dire straits and the responsibility Hanshiro feels for his fate. The core of the film is a delicately handled family drama with a whiff of a Dickens novel or a Victorian melodrama. Eventually, we are won over by the story when we come to realise what was at stake for both of the men who called at the House of li.

A big problem with Hara-Kiri, is Miike’s decision to follow in the footsteps of Werner Herzog and Wim Wenders and put 3-D at the disposal of something other than animated blockbusters and genre fare. Sadly, it feels more of a distraction than an enhancement allowing a depth of focus in some scenes no more impressive than what cameraman Gregg Toland achieved in Citizen Kane.

The required glasses cloud the film with an olive fog that dulls the lustre and precision of the often exquisite colour photography by Nobuyasu Kita that is at its most resplendent in the vibrant tints of autumn leaves and a showdown in gentle snowfall.

Miike regular Koji Yakusho is a typically commanding presence as Kageyu whilst Ebizo Ichikawa brings a righteous anger to Hanshiro. Miike’s decision to frame both men in lingering close-ups adds to the intensity of the impact they make.