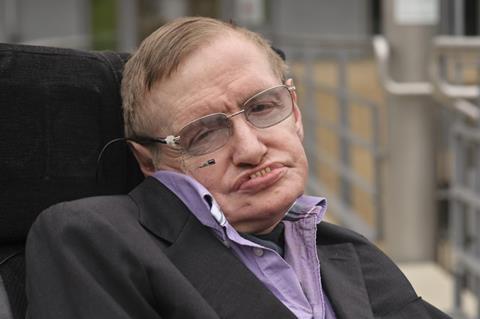 This documentary gives an extraordinary look into the life of one of the world’s most famous living scientists, Stephen Hawking. Told in his own words and by those closest to him, Hawking gives an insight into how Motor Neurone Disease has presided over his life and trapped him in his body.

What remains at the end of Hawking is his legacy - his book A Brief History of Time, that he intended to be “a bestselling airport novel” (it went on to sell 10 million copies) and his incredible discoveries about the universe.

Hawking’s celebrity will surely attract attention to this documentary, produced for PBS and Channel 4, with niche theatrical releases and further acquisitions by international broadcasters highly likely. Vertigo Films is set to release the film in the UK. The film screened at SXSW.

Written by Hawking, with the help of documentary filmmakers Ben Bowie and Stephen Finnigan, the film offers a never before seen look into Hawking’s private life from his childhood in Oxford to the heights of fame in California, celebrating the life’s work of this remarkable man.

At 71, Hawking still goes to work everyday at Cambridge University, where he resides as director of research at the Department of Applied Mathematics and Theoretical Physics.  He has no plans to retire, but his carers reveal that this condition is steadily worsening, and that he can now only write by flinching his cheek muscle. They also express fears for his safety, supposing his breathing equipment was to fail in the night.

However, the film reveals a man who still gets so much from life, despite living with the constant risk of death. His positive attitude and life-long passion for science keep him fighting for survival, against all odds. At the age of 21 Hawking was given two years to live and abandoned his PhD, sinking into a depression only lifted by listening to Wagner.

No one knew how long he would survive, but Hawking was encouraged to finish his studies when he met Jane Wilde, the woman who was to become his wife. After they married, he went on to make major discoveries about The Big Bang and the lifespan of black hole, earning him recognition around the world.

Following his rise to fame, he became the international spokesman for some of the most complicated concepts about the creation of the universe brought into the public sphere, and was adorned with medals and awards. He says: “The notion of fame is a curious thing to me,” but it is something he has had to learn to live with.

Hawking is an inspiring story of a man who refuses to let life’s challenges stop him getting the most out of life, showing his strength of mind in a body that continues to fail him. His popular culture profile is reinforced as the film shows him in a comedy sketch with Jim Carrey, becoming animated in The Simpsons and appearing on Star Trek: The Next Generation.

In interviews with his ex-wife, biographer, sister, cousin, colleagues and carers over the years, a portrait of a man we only know from his public persona is revealed. Old pictures of Hawking in a boater hat punting in Cambridge show a man whose reputation was both for being the life and soul of the party and as the one people nicknamed ‘Einstein’ by his friends. But what remains at the end of Hawking is his legacy - his book A Brief History of Time, that he intended to be “a bestselling airport novel” (it went on to sell 10 million copies) and his incredible discoveries about the universe.