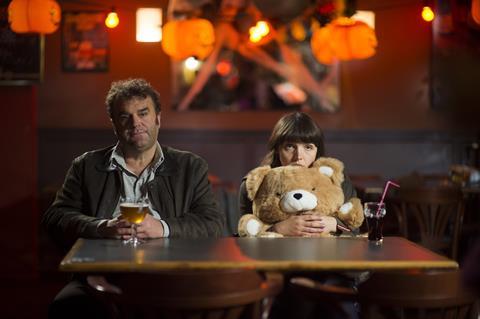 For her second feature, the Belgian comic actress Yolande Moreau has cast the Italian actor Pippo Delbono in the lead role of Henri in this mournful little film about an alcoholic chef and his friendship with a girl who has a mild mental handicap (Mammuth’s Miss Ming).

Miss Ming is as appealing as she was in Mammuth, an able performer who has more than natural charm going for her.

While Delbono’s portrayal is all Marty, the film itself is thematically placed somewhere between Le Huitieme Jour and Yo, Tambien, taking an almost Kaurismaki approach to interiors and pacing in the early stages. That’s a peculiar recipe indeed, which will probably do better in France on release this December than overseas, although Moreau and Delbono are a team with enough appeal to attract the curious to select festival screenings.

Moreau, who takes a lively cameo in one of the film’s more impactful scenes, won a Cesar for her first film as director, When The Sea Rises (2004), although she is far better known as an actress. Here she heads to the Charleroi region of Belgium (the film’s second half, which takes place on a beach in Middelkerke, in West Flanders, boasts some engrossing location work and is Henri’s high point.)

Moreau’s story, about a depressed man who has just lost his wife and the woman sent to help him from the nearby home for the mentally handicapped, is tough to pull off. Moreau walks a fine line of credibility, in which she is balanced by the magnificent Delbono and Miss Ming (who is also credited as Candy Ming in the film) again silently expressive as Rosette.

More challenging is Moreau’s tone, which is idiosyncratic and deliberately off-kilter. Occasionally it’s whimsical; sometimes it makes a half-hearted stab at comedy; mostly it’s morose. It’s a challenge even for this level of performance when the call finally comes for Delbono to lift Henri into orbit.

Henri is a taciturn chef in a restaurant he runs with his wife when she suddenly dies and he’s left alone with the dishes and his beloved pigeons (the film’s blunt metaphor). His disapproving daughter suggests he hire Rosette from the local White Butterfly facility to help out with the more menial aspects of running the story, although Henri prefers to sit at the bar sampling the merchandise with his two old-codger friends.

Moreau briefly flirts with putting Rosette in danger, when the men – careless as opposed to malevolent – feed her wine and comment on her physique, but she’s not really interested in following that through. Instead, after a misunderstanding, former cycling champion Henri smashes up his restaurant and they both go on the lam to Middelkerke, where they take in the joys of the local funfair and start to fall in love.

Henri never seems completely sure of where it’s going. The fact Henri is a former cycling champion is crudely inserted in the piece at the midway mark and is never referred to again; he drinks heavily and blacks out and says nothing for most of the film so there’s a sense he could do anything at any time – he’s a cypher. In leaving herself all possible avenues open for the entire picture, Moreau refuses to be pinned down and Henri never manages to fully convince.

Visually, this is a film of two parts – the interiors of Charleroi and the open spaces of the deserted off-season beaches of Flanders. The residents of the White Butterfly home are portrayed by the Companie de Oiseau-Mouche, which is a performance troupe for disabled artists. Miss Ming is as appealing as she was in Mammuth, an able performer who has more than natural charm going for her.