The famed Internet Cat Video festival makes its UK debut, and the crowd purrs with approval. 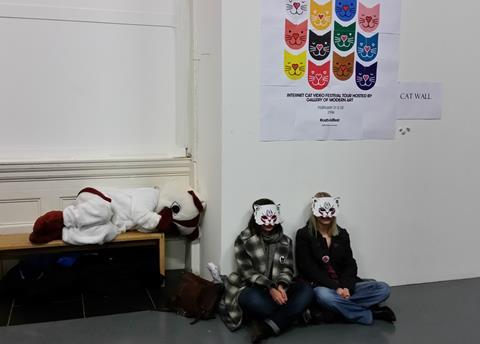 Did I feel a twinge of guilt passing over the Powell and Pressburger restoration to watch a cat push pens off a desk? Yes, yes I did. But it was the first time that the famed Walker Art Center’s Internet Cat Video Festival was making an appearance in the UK, and I wasn’t going to miss it.

So, along with several hundred other cat fanciers, I found myself at Glasgow’s Gallery of Modern Art (GOMA) for the debut Internet Cat Video Festival – presented as part of this year’s Glasgow Film Festival. A grand 18th century hall hosting images of cats sparring with iguanas? Why not!

The screening itself was about 70 minutes long, lifted straight from the Walker programme, with anything from Vines of cats jumping in the air to music videos starring cats, sweet animated shorts, a feline Psycho homage, vintage cat clips from the archives, and the latest Henri le Chat Noir short.

It was one of the happiest screening experiences I’ve encountered – ages three to 70 seemed to be highly entertained, laughing frequently – the Internet clips that provide quick work distractions were indeed better experienced with a live audience. The best moments were like watching feline Buster Keatons in slapstick genius. There was a hearty round of applause as one determined cat showed his skill at opening his own cage; plus a collective ‘awww’ during a kitten montage.

The Minneapolis-based Walker Art Center has attracted 10,000 submissions per year for its cat video festival (which has celebrated three editions), and the Glasgow crowd proved there is certainly appetite for such an event on this side of the pond. Several hundred tickets sold out within 24 hours of the event being announced, and re-runs of the screening were quickly added at Glasgow Film Theatre.

Organisers offered more than just moving images, with cat-themed cupcakes for sale, cat adoption information available, and competitions for cutest and craziest cats (sadly, no moggies were in attendance, they were judged on photos alone). There were hipsters dressed up as crazy cat ladies, in addition to some genuine crazy cat ladies. The spirit of the day was so infectious that this reporter found herself crafting an elaborate cat toy made of feathers, bells and strips of yarn. Reader, I do not even own a cat.